UPDATE: (Sept. 12, 2017) Planned Parenthood has added medication abortions at their Kansas City, Missouri, facility. Missouri now has two abortion facilities. This reduces the number of states with one remaining abortion facility to 5. 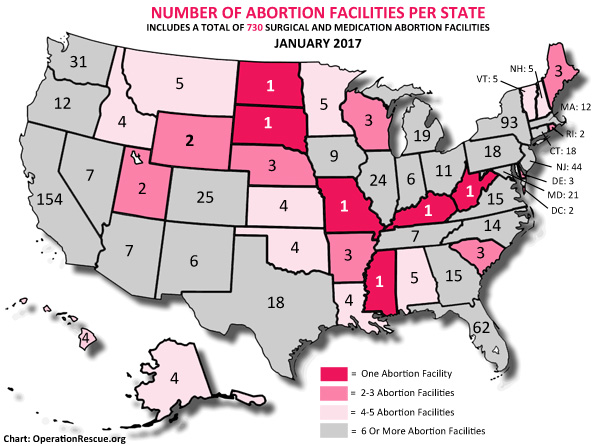 By Cheryl Sullenger
Washington, DC – On the 44th Memorial of the Roe v. Wade Supreme Court decision that decriminalized abortion in America, we stop today to mourn the loss of an estimated 60 million innocent lives. However, amid that unspeakable tragedy, there is now reason to hope, according to information released today by Operation Rescue.
Last week, it was learned that two surgical abortion facilities, one in West Virginia and one in Kentucky are permanently closing. That adds those states to a growing list of states with only one abortion facility.
Today, the following six states have a single abortion facility: 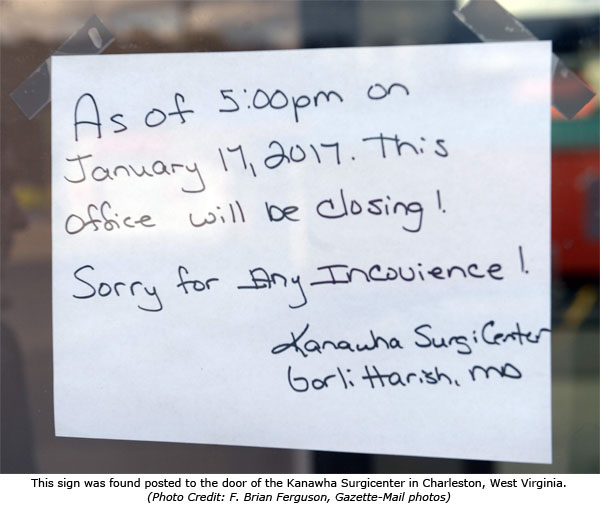 The Kanawha Surgicenter in Charleston, West Virginia, posted a sign on its door informing customers that it would permanently close on January 17, 2017. The Charleston Gazette reported that the owner and abortionist, Gorli Harlish, had moved to California two years ago and would no longer be commuting monthly to West Virginia to conduct abortions.
In Kentucky, the EMW Women’s Center announced that it would permanently close on January 27, 2017, after it lost its least in the building in which it had been operating since 1989. It was forced to halt abortions in June 2016, after it was discovered that it had been operating without a facility license.
In addition, there are ten states that have 2-3 abortion facilities remaining. Those states are Arkansas, Delaware, District of Columbia, Maine, Nebraska, Rhode Island, South Carolina, Utah, Wisconsin, and Wyoming.
“As abortion facilities close, we see the number of abortions dramatically decrease in our country,” said Operation Rescue President Troy Newman, referring to surveys recently released by the Centers for Disease Control and the Guttmacher Institute. “This tells us that more women are joining the trend of rejecting abortion. This is great news on a day that we remember the millions of babies — and all too often, their mothers — who have died since 1973. We pray that soon, no babies will die from the barbaric practice of abortion.”
Operation Rescue conducts annual surveys of U.S. abortion facilities and has documented the decrease in the number of abortion facilities over time. In 1991, there were 2,176 surgical abortion facilities in America. Today there are 516.
Since 2000, when the abortion drug Mifepristone (RU 486) was approved for use in the U.S., a number of abortion facilities have cropped up that only dispense abortion-inducing drugs. The number of those facilities today is 214.
Read OR’s statement on why abortions are decreasing. 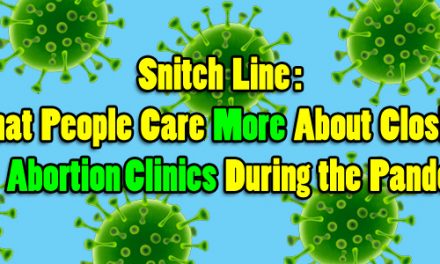