History of Our Headquarters

Operation Rescue bought and closed and abortion clinic in Wichita, Kansas, which now serves as our National Headquarters 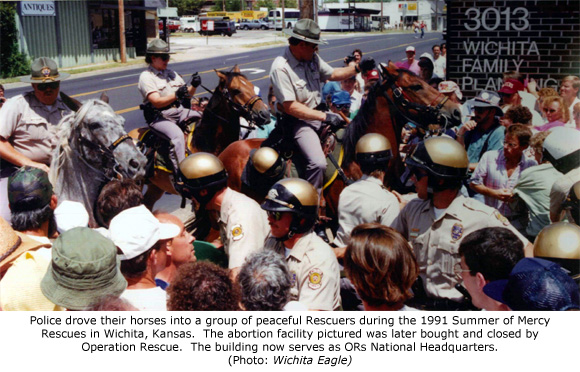 Wichita, KS — On June 29, 2006, Operation Rescue made the surprise announcement that, using a third party, the group had purchased the building that housed Central Women’s Services, an abortion mill located at located at 3013 E. Central in Wichita, Kansas, that was formerly known as Wichita Family Planning. It was announced that building would be renovated to serve as Operation Rescue’s national headquarters, and would feature a memorial to the pre-born.
Quick action closes mill
Operation Rescue learned in late April, 2006, that Central Women’s Services had not been able to pay its rent in months, and that the property was for sale. OR’s President, Troy Newman, acted quickly to make an offer on the building through a third party, and specifically requested that the current tenant not be retained. That stipulation was placed into the real estate contract. At that time, Central Women’s Services was an open and functional abortion business.
It was later learned that Central Women’s Services had come up with the back rent after the building had entered escrow and asked to continue their rental agreement with the new owner. However, because the property was under contract with the stipulation that CWS would not be allowed to stay, the abortion mill was instead forced to close.
“We have no doubt that if we had not moved quickly to buy that building, this abortion mill would still be in operation today,” said Newman.
50,000 dead babies The abortion mill, which did business under a variety of names over a span of nearly 3 decades, had operated in the current location for 23 years, opening on August 31, 1983, after relocating from an office near Pine and Emporia in Wichita. It is estimated that as many as 50,000 pre-born babies were aborted there.
The abortion mill captured the attention of local pro-lifers during the 1991 Summer of Mercy when a Pastor’s Rescue led by Operation Rescue tactical director Jeff White resulted in the arrests of 80 members of the clergy in what was likely the largest incident of civil disobedience by pastors in the history of the pro-life movement.
Small groups of sidewalk counselors faithfully offered help to women at that location until it’s permanent closure in May, 2006.
Operation Rescue comes to town In 2002, Operation Rescue relocated its offices from Southern California to Wichita and began a campaign to expose the abortion industry there. Between 2002 and 2006, abortions dropped a whopping 16% in Kansas.
Operation Rescue believes the drop in abortions hurt the abortion industry across the board, and heavily contributed to Central’s financial difficulties. “Any company that looses 16% of their business is going to be hurting,” said Newman.
In addition to providing seasoned sidewalk counselors at the Central location, Operation Rescue purchased an empty lot behind Central Women’s Services and placed a large billboard sign there warning women of the dangers of abortion. This sign faced the main entrance, and was repeatedly vandalized. The Truth Truck was also frequently parked in the lot during abortion days.
Since the abortion mill closed, Operation Rescue donated the lot to A Better Choice, the crisis pregnancy center next door. The lot has since been turned into a park. Prior to its closure, Central was open for abortions only two days per month, contributing to their financial woes. Abortionist Ann Kristin Neuhaus once operated there until she quit the Central mill in 2001, finally closing her Lawrence, Kansas, abortion business for good in 2002 under a cloud of accusations that she had committed an abortion on an unwilling woman and other infractions.
Abortionist Sherman Zaremski of Kansas City took over for Neuhaus, driving three hours to Wichita to kill babies at Central. He has since retired.
Then in December of 2005, the mill closed for five weeks. When it reopened, there was a new abortionist, former Planned Parenthood employee Ronald Yeomans, who continues to operate an abortion mill in Kansas City, Kansas, as of this writing. Operation Rescue published exposés on all three abortionists and conducted First Amendment outreaches in the home communities of Zaremski and Yeomans.
In July, 2005, Operation Rescue documented a suspected botched abortion at the now closed abortion mill.
Selling out and leaving the horrors behind In May, 2006, while the building was under contract and in escrow, Operation Rescue staff member Cheryl Sullenger attended a yard sale at Central Women’s Services where office supplies and equipment were being sold. She noted that the office was dingy, cramped, and dirty. The abortion business vacated the mill immediately after the sale.
It was only during a walk-through of the vacant structure with a realtor after the abortion business moved out and the sale closed, that the full nature of the filthy conditions were revealed.
“There was mold, and general filth,” said Sullenger. “The carpets outside the abortion rooms were stained with blood, even though it was evident that some effort had been made to clean them. The ceiling nearby was broken. All of the walls were dirty and some were covered with cheap contact paper instead of being properly maintained.”
Gruesome discovery Newman, Sullenger, and Jeff White, who was instrumental in helping Operation Rescue obtain the property, discovered a small closet between the two “procedure” rooms. The closet contained a sink surrounded by gallon bottles of bleach and drain cleaner.
“Under the sink was one of the biggest garbage disposals I have ever seen,”; said Newman. “The entire area had the stench of death. It was the sink where the suction machine bottles were washed. In fact, dried blood could be seen that had seeped out from the metal band that surrounded the sink top. There was a bucket marked ‘biohazard’ next to the sink. We were all sickened by the thought of all those thousands of innocent children whose blood had been washed down that sink. It was an experience I will never forget.”
Central made news in 2005 when Operation Rescue learned that the packaged the remains of aborted babies were delivered by courier to Engineered Recovery Systems in Newton, KS, where they were “processed” and dumped in a landfill near Kansas City that had virtually become an aborted baby graveyard.
Out of death comes life
During the initial walk-through of the building OR staffers noticed that the phones were ringing.
“We realized that the abortion clinic had neglected to terminate their phone service. We spent the day answering phones and talking to abortion-minded women about the precious lives of their babies and forwarded further calls to local pregnancy help centers where women received life affirming information and counseling instead of abortion appointments until the phone lines were disconnected about two weeks later,” said Newman.
After the initial walk-through with the realtor, a woman approached the group to inquire about an abortion. Sullenger, a veteran sidewalk counselor, took the woman through the abortion mill and pointed out the general filth inside the various rooms. The young woman was clearly horrified by what she saw. Sullenger continued to discuss motherhood and the blessing of children with her. The woman decided against abortion left the scene with a commitment to keep her baby.
Since then dozens of women who have come to OR’s office seeking an abortion have been referred to the pregnancy help center next door, which reports they have a 100% “save” rate among these women.
Redeemed in the name of Jesus After fully documenting the appalling condition of the clinic, (click here to view a video documentary produced by Life Dynamics, Inc.), and allowing time for the public to view it first-hand, demolition finally began late in 2006. It was the first step of the renovation process.
“We want this building to be a testament to the redemptive power of Jesus Christ. If Jesus can redeem a building, He can redeem lives and heal hurting hearts,” said Newman.
In January, 2007, Operation Rescue held a dedication of the building to the Lord’s work, which was attended by many of the rescuers who had been arrested at that site during the 1991 Summer of Mercy for attempting to save babies from abortion. Rev. Dr. Gary Cass, founder and president of DefendChristians.org, officiated over the dedication ceremony.
Operation Rescue’s Beautiful National Headquarters 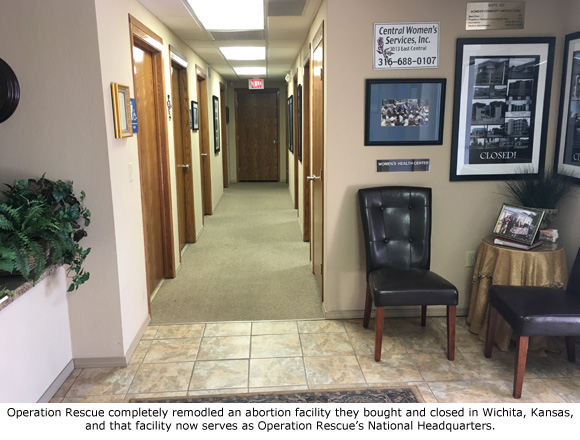 In early 2008, renovations were finally completed and Operation Rescue moved into their beautiful national headquarters.
“We are very excited to finally be working from our new headquarters,” said Operation Rescue President Troy Newman. “The transformation from that filthy abortion mill has been amazing. You would hardly know it was the same building. Everything is new and geared toward saving lives. It is an awesome testimony to God’s redemptive powers.”
The building features an entirely new floor plan. Everything from the old abortion mill was in such poor condition that nothing was salvageable.
The headquarters’ features include a welcoming reception area, staff offices, a printing center, a beautiful prayer room for private devotions, and a spacious meeting area used for press conferences and other meetings and public gatherings.
Also featured in the building is a beautiful memorial wall dedicated to the pre-born as a reminder of the building’s past as well as OR’s mission to stop the shedding of innocent blood.
“We thank God for allowing us the privilege of closing and converting an abortion mill that was open for 23 years into a place where we can work full-time to stop abortion,” said Newman. “We have felt God’s hand leading and providing for this project every step of the way. We know this is where He wants us to be. We especially want to thank our supporters whose generosity and love for the pre-born made this possible. We even had a baby saved here our first week working in our new facilities! God has truly been glorified though this and we pray this building will continue to bring glory to God.”
“This mill closed because Christians decided to take meaningful action. We pray this testimony will encourage others to act in their communities, because we have it within our ability, through God’s grace, to stop the killing,” said Newman.