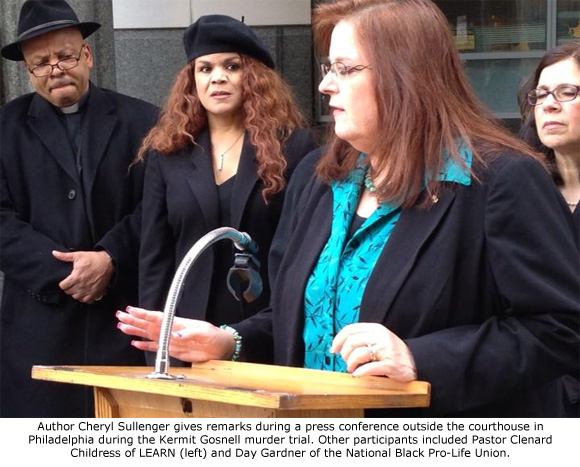 PRESS RELEASE
Philadelphia, PA – “The world would not know the name of Kermit Gosnell if it were not for Cheryl Sullenger,” said Troy Newman, President of Operation Rescue.
Sullenger attended the now infamous abortion/murder trial in Philadelphia, Pennsylvania, in the spring of 2013. She was the first journalist outside local news affiliates to report daily on the proceedings’ shocking revelations and often-emotional testimony to a national audience. Her reporting sparked a Twitter storm that was responsible for drawing national media to cover the trial.
Sullenger, who followed the story from the moment of the police raid through the trial and sentencing wrote a book about the Gosnell case from a different perspective than one might expect. Based on her over three decades of research, she shows throughout the pages of The Trial of Kermit Gosnell how many of the practices at Gosnell’s horrific abortion business can be found in other abortion facilities around the nation.
In her book, Sullenger documents a terrible truth: Kermit Gosnell is not alone. 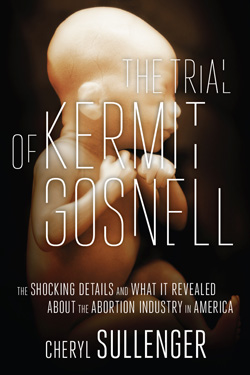 “Without the hard work of Cheryl Sullenger, the public might never have heard of Kermit Gosnell. Cheryl hounded the district attorney, poured over documents late at night, and traveled to Philadelphia to attend the trial when there was only a couple of local news reporters in the courtroom,” said Newman. “As you read her book, you will feel like you are sitting in the courtroom with her, experiencing all the emotions of one of the most important abortion-related trials in history.”
Gosnell was once a leader in promoting abortion prior to Roe v. Wade but had sunken into obscurity operating a deteriorating abortion mill in West Philadelphia. He preyed primarily on poor urban women of color.
When police raided his Women’s Medical Society, they thought that they were putting an end to a pill mill that was the largest supplier of illicit prescription painkillers in Philadelphia. But once inside, police made the grisly discovery that Kermit Gosnell’s medical office was something much worse.
Police seized the bodies of 47 aborted babies – all with mysterious wounds across the backs of their necks. They soon realized they had uncovered a “House of Horrors” where babies were routinely born alive during very late-term abortions only to be brutally murdered by him and his incompetent staff.
“There is no person who better understands the horrors occurring behind the closed doors of abortion facilities than Cheryl Sullenger, who has spent years documenting and exposing abortion abuses,” said David Bereit, former CEO of 40 Days for Life. “In The Trial of Kermit Gosnell, Sullenger reveals the full story of the courtroom drama that shocked and outraged America. This page-turning narrative of murder, abortion, political cover-ups, and regulatory failure shatters the facade of ‘choice,’ and demonstrates that Gosnell isn’t the only abortionist committing barbaric crimes in America. Once you read this book, you will never view abortion the same way again.”
The Trial of Kermit Gosnell is available in paperback or digital format at the following booksellers: Amazon.com, Barnes&Nobel.com, Superstore.WND.com.
Sullenger serves as Senior Vice President of Operation Rescue, based in Wichita, Kansas. She is available for interview and public appearances. Call 316-516-3034 to schedule.