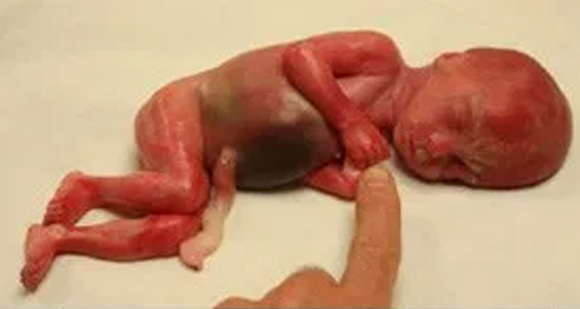 Medical Examiner admits to OR that heartbeat after birth was “probable.”

ORLANDO, FL — Operation Rescue has obtained the autopsy report for Baby Rowan, the infant said to have been born alive on April 2, 2005, at a Florida abortion mill and whose mother claims was refused help by abortion workers in spite of her pleas on behalf of her dying son.

The autopsy report describes Baby Rowan as a male of 21-22 weeks gestational age who appeared to be a completely healthy baby. He was free from congenital abnormality and showed no signs of trauma. However, the report found no air or excessive fluid in the lungs, nor was there air or fluid in the stomach. Thus, the report concluded “forensically” there was no evidence the fetus was born alive.

In an exclusive interview with Operation Rescue, Dr. Garavaglia was specifically asked about weather or not the baby’s heart was beating when Rowan left the birth canal. “I can only deal with the facts I can find,” she responded, indicating that there would be no way to tell from an autopsy exactly when Rowan’s heart stopped beating. Garavaglia believed that the only scientific evidence of life after birth that she could hope to find was air in the lungs.

However, air in the lungs is not the only sign of live birth, according to the Born Alive Infant Protection Act of 2002, (BAIPA). Three other criteria of life at birth are a beating heart, pulsating umbilical chord, or movement of voluntary muscles, none of which can be determined by an autopsy. Only one of these criteria must be met for a child to be protected under the BAIPA. Rowan’s mother, Angele, has stated repeatedly that Rowan moved his leg, turned his head toward her voice, and grasped her finger with his hand before passing away.

While the autopsy could not answer the question of whether Rowan met any of the other three of the criteria for life, the report does support Angele’s claim that she did not receive a shot of digoxin, a drug injected into the baby’s heart to stop it before the induction of labor. The report indicates that Rowan’s body was trauma free.

“There was no evidence of needle marks,” said Dr. Garavaglia.

The abortion clinic maintains that Rowan could not have been born alive because he received a lethal digoxin injection into his heart before labor was induced to insure he was dead upon delivery. The physical evidence soundly refutes their claim.
When Dr. Garavaglia was asked if the heart was beating when the baby exited the birth canal, she responded, “I can only go on what we can check for.” However, after further discussion Dr. Garavaglia agreed it was “probable” that Rowan’s heart stopped beating after exiting the birth canal, which would qualify him for protection under the BAIPA.

“Even according to the Medical Examiner, it is likely that Rowan’s heart was beating when he was born,” said Newman. “This was simply something Dr. Garavaglia could not forensically prove or disprove. Because of the probability that his heart was beating upon birth and in light of the eyewitness account that Rowan moved voluntary muscles, we must deduce that the lack of air in the lungs is not conclusive proof that Rowan was stillborn.”

“Baby Rowan was a perfectly health baby boy. He went through the labor and delivery process, which is designed to deliver LIVE babies, not dead ones,” said Newman.

“There is nothing in the autopsy report to indicate that Rowan expired before his delivery,” he continued. “In fact, there has been nothing to indicate that Rowan was killed by anything other than the fact that he was too young to survive very long outside the womb. But just because he lacked the strength or maturity to draw a breath into lungs that had not been suctioned does not mean that he was not alive at birth. He moved voluntary muscles after expulsion from the birth canal, and that meets the definition of a live birth according to the Born Alive Infant Protection Act.”

The point is a critical one. On April 22, Health and Human Services Secretary Mike Leavitt stated, “As a matter of law and policy, the U.S. Department of Health and Human Services will investigate all circumstances where individuals and entities are reported to be withholding medical care from an infant born alive in potential violation of federal statutes for which we are responsible.”

Angele stated in an interview with World Net Daily that she presented herself for an “induction” abortion at the EPOC abortion clinic in Orlando where Dr. Harry Perper prepared her to begin an abortion by premature delivery. After a harrowing labor experience, Angele delivered her 22-week old baby boy into a toilet at the abortion mill. She repeatedly called for help once she saw movement in her son, but was denied assistance by abortion clinic workers. She instructed her friend to call 911, which was done, but emergency workers who responded to the call were led to believe that no emergency existed and were turned away.

Angele now deeply regrets her abortion and is eager to work to insure that this kind of thing does not continue to happen to other women and their babies.

“Somebody in that clinic should have rendered assistance to Angele and her tiny son. But they didn’t and a baby died. We believe that is a violation of the law,” said Newman. “We clearly have a case for the Department of Health and Human Services to investigate, and we strongly urge them to do so immediately.”