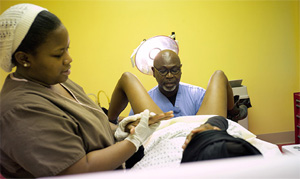 The National Network of Abortions Funds (NNAF) released a statement yesterday distancing itself from nationally known abortionist Willie Parker after allegations arose that he was involved in a pattern of sexual misconduct.

Willie Parker has been heavily promoted by the Abortion Cartel over the years as being a supposed “Christian” abortionist in the South – one who could lecture actual Christians about their intolerance toward child-killing.  Parker has been held up as a “hero” and an icon within the pro-abortion community.

Now this pseudo-Christian’s true colors have apparently been revealed.

In a blog post published on Medium on March 24, 2019, by Candice Russell, she admits to having an unwanted sexual encounter with Parker while she was heavily under the influence of alcohol.  She had apparently been aware of rumors of Parker’s sexual misconduct, but remained silent because she idolized him for openly promoting abortions.

She apparently came forward, according to her blog, because she heard that news was about to break that would expose his predatory sexual behavior.

The National Network of Abortion Funds, which provides financial assistance with abortions for women who cannot afford one,  announced it was merging two funds, the Willie Parker Fund and the George Tiller Fund, into one in order to “make sure to remove any and all obstacles to supporting abortion funding in the South without being concerned about whether doing so matches the values we all hold dear.”

“I’m not sure which ‘values’ the NNAF was referring to.  Was it the ones that embrace chopping innocent babies in the womb or the ones that castigate Christians for trying to stop the slaughter and the abuse?” asked Operation Rescue President Troy Newman, whose pro-life organization has often exposed sexual misconduct within the Abortion Cartel.

The abortion industry has a major problem with sexual abuse, and Willie Parker’s misconduct is just the tip of a very large and nasty iceberg.

An exposé published by Operation Rescue on October 19, 2016, reported on many of the more notorious cases.  Here are just a few:

Despite so many cases that are well documented, it is rare when the mainstream media gives these stories more that a couple of paragraphs in the local paper.  Sometimes, the even fact that an abortionist is involved is left out of those reports.

This has only enabled the abuse to continue.

“Sexual abuse is the Abortion Cartel’s dirty little secret.  It’s time to admit that these are not anomalous incidents.  They reveal a pattern of abuse that the abortion businesses have kept secret for years,” said Newman.  “Hopefully, now that Willie Parker’s abuse is out in the open, they will stop covering up for these predators, and allow them to be brought to justice.”

For more on this topic, read the full 2016 report, “Documented Sexual Abuse Committed by Members of the Abortion Cartel.”