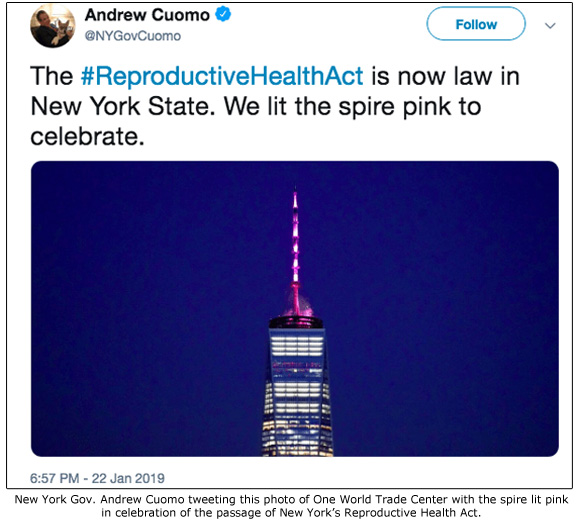 By Cheryl Sullenger
Albany, NY – Last week, New York Gov. Andrew Cuomo signed the Reproductive Health Act into law, which liberalizes abortion in that state, much to the dismay of pro-life supporters nationwide.
The new law does several things:

“It is likely that some of the clinics that do late second-trimester abortions are probably already slipping past their stated gestational limits on occasion,” said Operation Rescue President Troy Newman.   “Now, they will just be able to do it out in the open.”
While this new law is indeed a moral travesty, none of this is new, nor is it likely to lead to rampant expansion of late-term abortions.
Certainly, New York is not the only state to provide exceptions that allow abortions throughout all nine months of pregnancy.   In fact, there are actually now seven states that have no gestational limit on abortions at all.  They are Alaska, Colorado, New Hampshire, New Jersey, New Mexico, Oregon, and Vermont.  The District of Columbia also has no gestational limit on abortion.
But just because a state has no gestational limits on abortion, it does not necessarily mean that third trimester abortions will occur there.  In fact, of the seven states and D.C., only Colorado and New Mexico have abortion facilities that openly conduct abortions throughout all nine months of pregnancy.  Those clinics are:

Here is a breakdown of the other states:

On the other hand, states with gestational limits have exceptions that allow abortions throughout all nine months of pregnancy. Those exceptions include babies with physical anomalies, and the health of the mother, which can literally mean anything, including the “mental health.”
States with those kinds of exceptions are numerous, yet clinics that openly conduct abortions throughout all nine months of pregnancy are California, Maryland, and Ohio.

But even with the lack of gestational limits in several states and exceptions in others that allow third-trimester abortions, notice there are only five clinics that actually openly do them in the entire country.  There are many reasons for this.
Unacceptable risks
Third trimester abortions are filled with risks.  Very early third trimester abortions are sometimes done using the dismemberment abortion procedure known as Dilation and Evacuation (D&E).  But as the baby grows, it becomes very difficult – and dangerous – to pull the baby apart and out of the body without injury to the mother.
That is why abortions those who specialize in third trimester abortions prefer to the Induction Abortion method, a procedure that takes three to four days and requires specialized training.  Even so, many women have died as a result of the many complications can arise during Induction abortions, which involve artificially dilating the cervix and using cheap drugs to induce early labor and leaves women to endure much of the painful process without adequate medical supervision. [Learn more about Induction Abortions.] [Learn more about abortion patient deaths.]
There are huge liabilities associated with third trimester abortions due to the dangers and the stigma associated with these dangerous abortions.  In fact, because of the many negatives to doing these latest of abortions, there are under ten abortionists in the entire country that are willing to kill babies in the womb that late into pregnancy that aren’t in prison (such as Pennsylvania’s Kermit Gosnell) or haven’t had their medical licenses revoked (such as Florida’s James Scott Pendergraft and New Jersey’s Steven Chase Brigham).
“There is no way a non-physician would be qualified to conduct a third trimester abortion.  It would be like having a phlebotomist take out your gall bladder. It’s unthinkably dangerous,” said Operation Rescue President Troy Newman.  “Third trimester abortions require specific training, and even then, they are far from safe. If unqualified non-physicians try to do third trimester abortions, there is no doubt that even more women will die.”
Demand is down
In truth, the market for late-term abortions has been steadily and rapidly declining, despite the large number of states that will allow them under various circumstances.   This is primarily due to the length and difficulty of the procedure, liability, and stigma.
In the past two years alone, there has been a remarkable 19% reduction in the number of abortion facilities nationwide that will conduct abortions after 20 weeks.  The demand for them along with the reticence of abortionists to do them means fewer late-term abortions are being done.
Planned Parenthood and late-term abortions
With that said, over the past two years Planned Parenthood has more than doubled their number of abortion facilities willing to kill babies after 20 weeks.  In fact, Planned Parenthood is really the only abortion business that is aggressively expanding to include late-term abortions, according to data compiled by Operation Rescue.
“Planned Parenthood occupies an ever-larger piece of a dramatically shrinking pie, when it comes to late-term abortions,” said Newman.  “Will they expand into late-term abortions in New York? Probably, but I predict it will be on a very limited basis.
New York’s abortion businesses
Results from Operation Rescue’s 2018 clinic survey showed that at the end of 2018, there were a total of 87 abortion facilities in New York.  Of those, 60 clinics voluntarily confined abortions to 14 weeks or under.  There were 17 clinics that limited abortions to 23 weeks or under.  Ten clinics were willing to abort through 24 weeks, or the end of the sixth month of pregnancy. 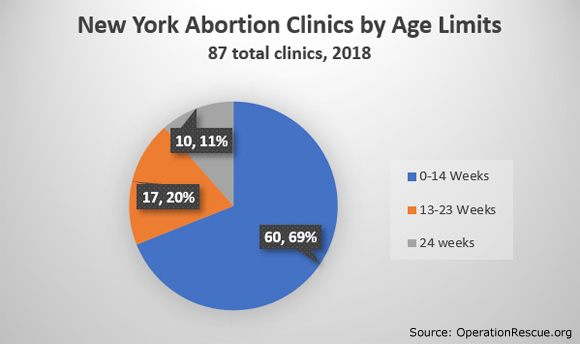 Only three of the 10 clinics that abort to the end of the sixth month of pregnancy are Planned Parenthood facilities.  If Planned Parenthood attempts to expand in the declining third trimester abortion business, only those three clinics would be even remotely equipped to handle them. 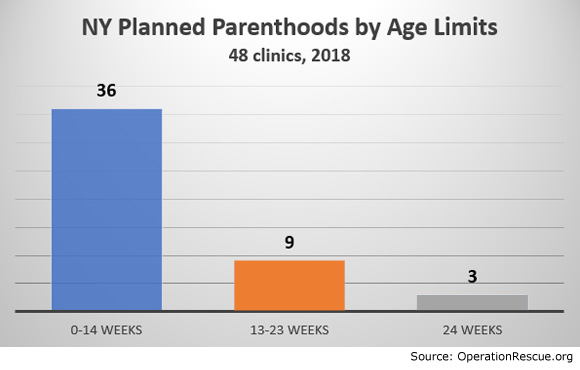 “The real challenge would be finding abortionists qualified and willing to do openly them,” said Newman.  “That’s why I doubt that third trimester abortions are the greatest threat from the New York law.”
So what is the biggest threat?
The possibility of non-surgical abortion clinics popping up in New York to dish out abortion drugs is much greater than a sudden expansion of late-term third trimester abortions. That is because the law allows for non-physicians to conduct abortions.
Non-physicians already dispense abortion pills in California without much oversight and very little qualifications.
Hiring non-physicians to hand out abortion pills is much cheaper than hiring a licensed physician to do the same task.  No specialized equipment is needed as there is in surgical abortion facilities, so in all, overhead is much lower, meaning there are more profits to be made.
This will most benefit Planned Parenthood, who is pushing hard into the abortion pill business and already operates the vast majority of pill clinics in the country, including 29 out of 30 such clinics in New York.
Planned Parenthood is aggressively attempting expand the use of telemedicine to dispense abortion drugs – particularly through a new process that involves a smart phone app that allows for delivery of the pills through the U.S. mail.  This experimental process is already available in New York.
Legalizing Gosnell’s crimes?
Some have postulated that with New York’s new abortion law, crimes committed by late-term abortionist and convicted murderer Kermit Gosnell will now be legal in New York.  He was convicted of first-degree murder on three counts of snipping the spinal cords of living newborns who survived abortions at his Philadelphia “House of Horrors” clinic.
That may well be the case.
The Federal Born Alive Infant Protection Act of 2002 mandates that babies born alive during abortions must be cared for as patients.  Unfortunately, that act has no enforcement clause, meaning there is no criminal or civil penalty for violating it.  Even Kermit Gosnell could not be charged with breaking that law.
But it is important to understand that babies are already being born alive more often that we know, and no prosecutions have taken place, except in Gosnell’s case.  Operation Rescue has documented cases in Kansas and Texas where clinic workers confessed to witnessing abortionists intentionally murdering infants born alive at abortion clinics.  Their accounts are chilling, as the following videos illustrate.

In 2018, the U.S. House passed the Born Alive Abortion Survivors Act in an attempt to provide criminal penalties for killing babies born alive during abortions.  Unfortunately, the bill stalled in the Senate, leaving babies who survive late-term abortions vulnerable to murder.
Renewed outrage
Despite the fact that late-term abortion atrocities have been occurring in our nation since the 1973 Roe v. Wade Supreme Court decision and even before, there has never been as much outrage expressed over them as there has been over New York’s Reproductive Health Act.
Perhaps this can serve as a catalyst for social change.
There is little difference between killing a baby born alive during an abortion, killing the baby just prior to birth, and taking the lives of early term human babies using abortion-inducing drugs.  They all unjustly take innocent human lives.
“We know from our own research that babies are being aborted up until birth – openly and secretly – all over the country.  We know the use of abortion pills is on the rise.  We must demand the end of all barbaric abortion practices. We must enact and enforce laws that provide stiff criminal penalties to serve as a deterrent to murdering babies whether they have been born yet or not,” said Newman.
“But if it gives any comfort, just understand that there is no expansion of abortion at any gestational age currently happening on a state or national level.  That’s a documented fact,” Newman continued. “Abortion clinics continue to close faster than they are opening.  Fewer abortions take place every year. Abortion as a business is in decline, and the New York law will not change that.” 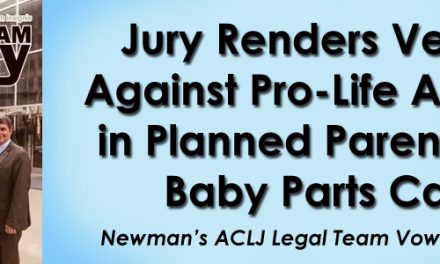