UPDATE! 6/1/2018: After Mississippi news sources reported yesterday that the woman who delivered the baby at the Mississippi abortion facility was seeking an abortion, now news stories have surfaced that report that may not have been the case. The source of both stories appears to have been Shannon Brewer, Director of the Jackson Women’s Health Organization where the incident occurred. Why the change in the story and what really happened? Operation Rescue filed a formal complaint yesterday with the Mississippi State Board of Medical Licensure seeking an investigation to ensure that the facility and abortionist Bruce Norman were in complete compliance with all applicable laws and patient care standards. Operation Rescue will update this developing story as new information breaks. 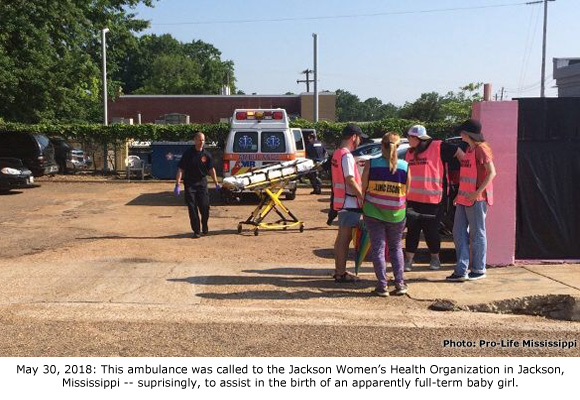 By Cheryl Sullenger
Jackson, MS – A reportedly full-term baby girl was born yesterday in the most unlikely of places – an abortion facility.
The baby’s mother was said to have been seeking an abortion at the Jackson Women’s Health Organization (JWHO) in Jackson, Mississippi. She was in the middle of her first consulting appointment and waiting for an ultrasound examination to determine her baby’s gestational age.
That was when she began to give birth.
A 911 call for assistance with a “full birth” was placed by the abortion business. The ambulance’s arrival alerted pro-life supporters to the medical emergency that was unfolding inside. A radio dispatch recording obtained by Operation Rescue confirmed that the subject of the emergency was a birth. (Listen to the dispatch below.)


Mother and daughter were transported to a nearby hospital where news reports say they are both healthy and doing well.
JWHO says it only conducts abortions through the 16th week of pregnancy. A new law passed and signed by Mississippi Gov. Phil Bryant just two months ago bans abortions after 15 weeks.
“We are grateful that the mom and baby are in good health, but there is just something about this whole story that seems suspicious. It’s hard to imagine a woman who did not know she was full term suddenly delivering a baby without knowing she was in labor. We are calling for a full investigation into this incident to ensure that all state laws were observed and patient care standards were met,” said Troy Newman, President of Operation Rescue.
“Most pregnant mothers who enter the abortion clinic leave without their beautiful babies. Several weeks ago, this baby girl could have been killed by the same doctor who delivered her today,” said Laura Duran, president of Pro-Life Mississippi.
That doctor was abortionist Bruce Elliott Norman. Given his checkered background, calls for an investigation are more than justified.
Norman is a long-time associate of JWHO’s owner, Diane Derzis, who also owned a now-closed Birmingham, Alabama, abortion business, New Woman All Women (NWAW), where Norman also worked. Both Derzis and Norman were essentially run out of that state after a coalition of pro-life groups, including the CEC for Life and Operation Rescue, complained about a 2012 incident where two overdosed abortion patients at the Birmingham facility were hospitalized on the same day.
That complaint resulted in an inspection that yielded a massive 76-page deficiency report that eventually led to the closure of the abortion business by the Alabama Department of Public Health.
Norman was later caught by the pro-life groups operating Derzis’ Birmingham abortion facility illegally, which resulted in a 2013 disciplinary complaint against Norman. His Alabama medical license has been listed as “inactive” since.
By January 2016, Derzis and Norman finally gave up trying to keep the NWAW open. The building was sold and was torn down.
“The Derzis/Norman partnership is a dangerous one that has been characterized by documented unsanitary facilities, incompetent practices, and deceptive behavior at the Birmingham and Jackson facilities. If JWHO was not the last abortion business in Mississippi, it would have been shut down long ago by the State. That says a lot about the shoddy nature of the place,” said Newman. “That new little baby girl born under Norman’s watch at JWHO has no idea how lucky she is to be alive and well today.” 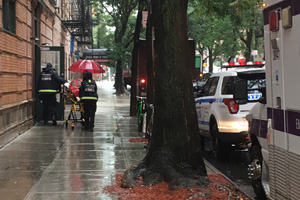 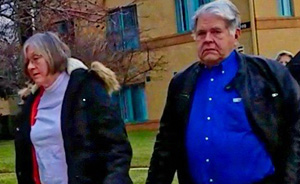