By Cheryl Sullenger
Cleveland, OH – Operation Rescue has received credible new evidence, apparently leaked from an inside source, that criminal conduct may have been involved in the abortion-related death of Lakisha Wilson at Preterm, a Cleveland, Ohio, abortion facility last year. Operation Rescue has joined once again with other state and national pro-life leaders in calling for a criminal investigation and closure of the abortion facility.
“The credibility of the evidence is beyond reproach,” said Cheryl Sullenger, Senior Policy Advisor for Operation Rescue. “It was unsolicited evidence provided to me by an unknown source who obviously wants the truth to come out. Once this information came to our attention, it was our duty to report it to the County Prosecutor.”
A letter of complaint was sent to Cuyahoga County Prosecutor Timothy McGinty on January 16, 2015, by the following pro-life leaders:

Copies to the letter were sent to Ohio Gov. John Kasich, Attorney General Mike DeWine, and Executive Director of the Ohio Department of Health Richard Hodges.
The groups are calling for an immediate suspension of Preterm’s facility license pending the outcome of the criminal investigation.
The letter focused on two allegations supported by documentation now in the possession of Operation Rescue:

• Criminal negligence, related to a small and repeatedly malfunctioning elevator at Preterm, which delayed emergency access and treatment to Ms. Wilson.
• Illegal abortion, related to evidence that Ms. Wilson’s pregnancy was well beyond Ohio’s 20 week limit.

Due to the sensitivity of the evidence that supports the complaint, Operation Rescue will only release it to designated law enforcement officials.
Faulty Elevator

Preterm operates five abortion procedure rooms on the third floor of their facility located at 12000 Shaker Boulevard in Cleveland. The only gurney access is through a small elevator that was malfunctioning on March 21, 2014, the day of Lakisha Wilson’s fatal abortion.
The new evidence shows that emergency medical technicians were delayed by the malfunction from reaching Ms. Wilson, who was suffering cardiac and respiratory arrest during a second-trimester abortion procedure.
When EMTs were finally able to access Ms. Wilson, they found her still on the abortion table with her legs in the stirrups. She was not breathing at all and her pupils were fixed and dilated. According to the documentation, Preterm abortionist Lisa Perriera had applied a pediatric oxygen mask to Ms. Wilson, which had to be replace by an adult-sized mask by emergency responders. Ms. Wilson’s IV line had been inadvertently pulled out during the confusion in the cramped surgical room prior to the arrival of ambulance personnel.
While EMTs were able to restart Ms. Wilson’s heart, they were unable to give her other necessary life support measures in a timely manner — including intubation — because in order to do so, they needed to lie her flat on a backboard. However, the inadequate size of the elevator prevented the EMTs from fully reclining the gurney as required.
Instead, Ms. Wilson was transported down the elevator in an upright, seated position. She was then rushed to an awaiting ambulance where she was finally intubated and her IV line restarted before being rushed off to University Hospital Case Medical Center, where she was later pronounced dead.
“There can be no doubt that the size and unreliability of Preterm’s elevator was responsible for delaying emergency care to Lakisha Wilson when every moment meant the difference between life and death,” said Troy Newman, President of Operation Rescue.
This was not the first time that Preterm’s elevator played a role in hampering emergency medical care for an abortion patient suffering from life-threatening complications.

Operation Rescue obtained 911 records that indicated on March 31, 2012, an ambulance was called for a 32-year old patient weighing approximately 300 pounds who was hemorrhaging after an abortion due to uterine atony, a condition in which the uterus fails to contract enough to seal off blood vessels after an abortion. The woman’s estimated blood loss was 600 cc’s, or in American measures, over 20 ounces.
However, the facility’s elevator was broken and the Preterm caller had to request additional responders to help carry the woman down from third floor in order to extricate her from the building so she could get the emergency help she needed.
“Women’s lives literally depend on Preterm’s faulty elevator that is just too small to ensure that proper care can be given during life-threatening medical emergencies. It is negligent for Preterm to conduct abortions under these dangerous conditions,” said Newman. “We also have to question why the Ohio Department of Health continues to allow Preterm to do abortions, knowing that the elevator is undependable and inadequate to allow proper access during the frequent medical emergencies that arise there. It seems irresponsible at best and possibly negligent on their part.”
Illegal Late-term Abortion The second concern expressed by the pro-life leader’s letter of complaint relates to the possibility that Ms. Wilson’s pregnancy, said by Preterm to be 19.4 weeks at the time of the abortion, was actually closer to 23 weeks – three weeks beyond the legal limit in Ohio. Despite the evidence that Ms. Wilson’s pregnancy was so far advanced, Preterm abortionists conducted no viability testing as required by law.
“We are aware that a person conducting an ultrasound can manipulate the transducer to make the baby appear to be younger or older, depending on the desired outcome. We have reason to believe that there was manipulation of the ultrasound results to make it wrongly appear that Ms. Wilson’s abortion was legal,” said Newman.
Such manipulation of ultrasound results was testified to in court by one of Kermit Gosnell’s co-defendants, Steven Massof, during Gosnell’s illegal abortion and murder trial in 2013, which as attended and reported on by Operation Rescue. Massof told the court under oath that falsification of fetal ages via ultrasound manipulation was routinely done at Gosnell’s abortion clinic. Gosnell was convicted of killing babies born alive during illegal late-term abortions at what has become known as his Philadelphia “House of Horrors” and is serving life in prison.
In addition, Operation Rescue conducted an undercover investigation in January, 2009, at George Tiller’s now-closed late-term abortion facility in Wichita, Kansas, that documented ultrasonic manipulation by a Tiller employee, which rendered a false fetal age on a pregnant Operation Rescue undercover volunteer. Operation Rescue had the actual age of the volunteer’s pregnancy confirmed by two independent ultrasound exams done by reputable providers.
Evidence Ignored
The evidence points to the fact that the Ohio Department of Health and the Ohio Medical Board are aware of the dangerous conditions at Preterm and of the fetal age discrepancies, but chose to ignore them.
Investigations conducted by both agencies at the behest of the pro-life groups went nowhere. The cases related to Lakisha Wilson’s death were quietly closed without action, leaving women vulnerable to possible illegal late-term abortions, and at grave risk due to a dangerously small and frequently malfunctioning elevator at Preterm.
Other calls for a criminal investigation have been ignored by the Cuyahoga County prosecutor’s office. A previous letter of complaint related to the Wilson death was submitted to Prosecutor McGinty by Denise Leipold, Executive Director of Right to Life of Northeast Ohio, in July of last year. Leipold never received an acknowledgement or response to her complaint.
Groups involved in the current attempt to gain a criminal investigation and prosecution hope this time, things will be different due to the supporting evidence that was sent to Sullenger.
“Based on the evidence now in our possession, it seems unconscionable that the Ohio Department of Health and Medical Board have allowed Preterm to continue to operate knowing that the lives of women and late-term pre-born babies that should be protected by law are being endangered every day at that abortion facility,” said Newman. “It’s just plain wrong, and now that we know the truth, we are attempting to rectify this intolerable situation and bring those responsible for these violations to justice.”
Background:
Wilson’s Autopsy Report
Press Conference from April 2, 2014
Pattern of Botched Abortions at Preterm
Cleveland’s University Hospital Enables Abortions
Buffett Foundation Tied to Preterm 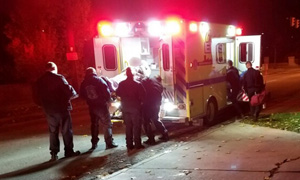