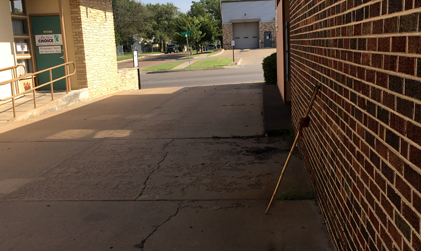 By Cheryl Sullenger
Wichita, KS – On Monday morning, a torch was found placed against the side of Operation Rescue’s National Headquarters in Wichita, Kansas. The torch was charred at the end, but does not appear to have been lit.
“It was either a failed attempt at arson or an attempt to intimidate us,” said Troy Newman, President of Operation Rescue. “In any case, we will not be frightened by terror tactics. We continue our work to expose abortion abuses and close abortion facilities through peaceful, legal means even in the face of danger.”
Operation Rescue’s security camera system caught the perpetrator on video riding up on a bicycle at 2:55 a.m. on Saturday, July 9, 2016, and placing the torch against the Operation Rescue building, then leaving the same way he came. He appeared familiar with Operation Rescue’s security system and was careful to avoid triggering the motion-activated floodlights on the building.
A police report was made and the torch impounded as evidence.
This incident was particularly disturbing in light of another suspicious incident that took place over the weekend that appeared meant to inflict harm on Newman.
Newman reports that the lug nuts to the driver’s front tire on his personal vehicle had been loosened at some time on Saturday. Newman was traveling slowly when he realized his wheel was loose. He was able to avoid a potentially dangerous traffic accident and pulled over safely. The lug nuts appeared to have been intentionally loosened.
That incident was also reported to police.
Over the years, Operation Rescue staff members have been subjected to numerous death threats and the office has experienced several acts of vandalism, including a window shattered by a rock, and sabotaged security cameras.

Avenues for Action Against Abortion Seminar Moved to Nov. 13 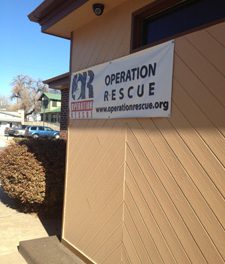