To add to his problems, an ambulance was spotted earlier this month at Carhart’s Bellevue, Nebraska, location – an incident that is under investigation by researchers at Operation Rescue.

Carhart operates the two facilities under the name C.A.R.E., a disingenuous acronym for “Clinics for Abortion and Reproductive Excellence.  His abortion businesses have gone by numerous names over the years, including “AbortionClinics.org” – his business name during the near-fatal abortion now before a Federal Court in Maryland.

According to court records, Haimanot Aragaw and her husband were living in Georgia when she discovered she was pregnant.  Because of the China Virus outbreak, which delayed lab testing, Aragaw found out late in her pregnancy that her baby was diagnosed with Down syndrome.

Because she was about to enter her sixth month of pregnancy, she was unable to obtain an abortion in Georgia and was instead referred to Carhart’s Bethesda facility, which conducts abortions throughout all nine months of pregnancy.

[Note: Operation Rescue is opposed to abortions on babies with Down syndrome as well as for any other conditions or “fetal anomalies.”  While mothers who abort bear their share of responsibility, if Carhart and abortionists like him did not conduct abortions for these reasons, the avoidable injuries to Aragaw would have been prevented and her baby could still be alive today.]

Accompanied by her husband, Aragaw kept her first appointment with LeRoy Carhart and his associate, Anh-Chi Dang Do, on May 20, 2020.  At that initial visit, her 23-week abortion was begun with the insertion of laminaria sticks, which slowly dilate the cervix.  She also received oral drugs that induce uterine contractions.

The next day, on May 21, Aragaw returned to the C.A.R.E facility where she was prepared for the completion of the abortion by Anh-Chi Do.  The laminaria was removed, after which Aragaw began to bleed heavily.

Abortions at the advanced stage of 23 weeks are generally considered too large for the use of the suction abortion procedure, which is commonly used in first trimester abortions because the baby’s body parts are too big to fit through the suction aspiration tubing.  Instead, the Dilation and Evacuation (D&E) dismemberment procedure is generally used for abortions after 14 weeks.

In this case, however, Do attempted to abort Aragaw’s baby using the first trimester suction abortion procedure.  Predictably, it did not end well.

As the procedure continued, Plaintiff Haimanot Aragaw was noted to be bleeding even more excessively to the extent that the Defendants and members of the support staff became covered in blood.

Carhart was called in to assist Do in completing the suction abortion procedure, but both abortionists failed to finish the abortion or control the massive blood loss.  They suspected that Aragaw’s uterus had been perforated.

An ambulance was called, and she was transported in critical condition to Shady Grove Adventist Hospital in Rockville, Maryland.  Once there, she was rushed into emergency surgery where hospital surgeons discovered that the uterus had been torn open.  The baby’s body, with head barely still attached to its torso, had been shoved into the abdominal cavity behind the uterus.  He or she was missing both arms and part of the right leg.

Aragaw received a full hysterectomy to save her life and suffered traumatic injury to her appendix.

“The lawsuit alleges that Carhart, Do, and the abortion facility staff ‘departed from the standard of care’ – an understatement if there ever was one,” said Operation Rescue President Troy Newman.  “In essence, the baby and the mother were both endured barbaric butchery, and the mother only survived by the unmerited grace of God.”

Last year, shortly after Aragaw’s nightmarish abortion, a whistleblower came forward and provided information about Aragaw’s condition, some of which has since been clarified in the recent lawsuit complaint.

The whistleblower had understandably assumed that a D&E abortion procedure had been attempted, but the lawsuit confirmed that the inappropriate suction method was used.  The whistleblower described the tear in the uterus as about 8-9 inches in length, which was consistent with the description in the lawsuit. The whistleblower also added that Aragaw required four units of blood “just to keep her alive” and that the bloody incident was emotionally disturbing to the hospital staff that treated her.

Operation Rescue obtained an Incident Report from the Montgomery County Fire and Rescue Service that indicated an ambulance equipped for Basic Life Support was dispatched for a “sick person,” indicating that Carhart’s staff likely downplayed the critical nature of Aragaw’s the medical emergency

Anh-Chi Dang Do is no longer working at the C.A.R.E. Bethesda abortion facility.  Her Maryland medical license expired on September 30, 2020, and has not been renewed.  She was never licensed in Nebraska but continues to practice with a specialty in Family Practice in the state of Washington.

In an unusual incident, a private ambulance arrived at Carhart’s C.A.R.E. abortion facility in Bellevue, Nebraska, on August 12, 2021. Photos taken at the scene showed two uniformed men escorting a woman into the abortion facility with two paramedics following behind.  The paramedics and ambulance later left the scene, leaving the two uniformed men and the woman inside.

Garth Kellogg Summers, D.O., is currently conducting abortions with Carhart at his Bellevue facility.  He served his residency at the University of Nebraska Medical Center.

Operation Rescue is currently researching this incident and will report when further information is available.

Since 2012, Operation Rescue has documented 23 medical emergencies at Carhart facilities in Maryland and Nebraska.  The most recent emergency occurred on March 21, 2021, at the Bethesda, Maryland, location in an incident that was downplayed by a member of Carhart’s staff.

Emergency 911 records indicated 37-year-old woman was transported by ambulance to the Holy Cross Hospital’s emergency room after receiving an abortion because Carhart was “not feeling confident” after she suffered “complications” during a late-term 21-week abortion. This is another example of Carhart’s staff downplaying a woman’s condition during an abortion-related medical emergency. 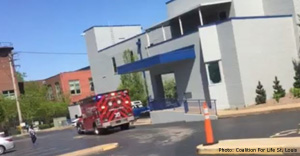