Germantown, Maryland – On Friday, Todd Stave, the landlord for Germantown Reproductive Health Services where LeRoy Carhart conducts his late-term abortion business, appeared on the Rachel Maddow Show. There, he admitted to being the son of an abortionist and complained that he had received respectful phone calls asking him to stop leasing space to the abortion business.
What Mr. Stave did not mention was that his father, Carl Edward Stave, was the founder of the Germantown Reproductive Health Center abortion clinic and its sister clinic, Prince George’s Reproductive Health Services in Hyattsville, Maryland.
Mr. Stave also failed to mention that his sister, Nancy Stave Samuels, is currently listed as the President of Germantown Reproductive Health Services, which includes the Prince George’s clinic. Mr. Stave and Ms. Samuels serve as trustees for the Norma A. Testamentary Trust that also owns the business condo leased to Germantown Reproductive Health Services.
“Todd Stave is more than an abortion clinic landlord. He is the son of the founder of this particular abortion clinic and the brother of the current clinic director. He’s an abortion profiteer, but it goes beyond that. He is actively protecting the family’s abortion business while misleading the public as to his true connections with it,” said Operation Rescue President Troy Newman.
Germantown Reproductive Health Services offers late-term abortions. The viable babies have their hearts injected with poison and the mothers are sent into labor. Women deliver their dead babies into a toilet or their babies are dismembered during delivery.
Mr. Stave is not the victim he would have us believe.
Stave was involved in an altercation where he attacked and struck a peaceful protester acting within his First Amendment rights on a public sidewalk. The protester, Peter Shinn of Pro-life Unity, who is disabled and wears a prosthetic leg, was doing nothing more that videotaping the protest. Shinn plans to file charges against Stave. (See video below.)
In addition, Mr. Stave recently called the home of Michael Martelli, head of the Maryland Coalition for Life, and threatened his family and his children by name.
Meanwhile, an Operation Rescue staff member was harassed with over a hundred text messages in a 48 hour period by a phone number originating from Stave’s area code. He was reported to the FBI as a possible suspect.
Stave has a history of criminal conduct. In 2006, he was convicted of three counts of selling cigarettes without a license and failure to obtain a trader’s license.
“Stave’s hands are not clean. We pray for his repentance and that he will divest himself of any part of his family businesses that sheds innocent blood,” said Newman. 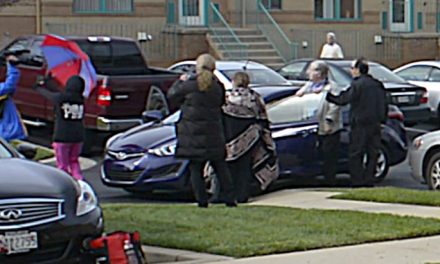