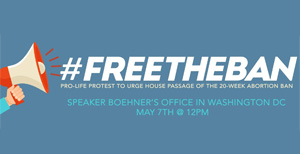 Washington, DC – Just hours after 20 pro-life leaders held a press conference seeking an immediate vote on the delayed Pain Capable Unborn Child Protection Act, it has been announced that a vote will now take place next week.
The leaders attempted to present to Boehner’s staff life-sized models of pre-born babies at 20 weeks to emphasize the humanity of the pre-born and the urgency of protecting babies that could survived if birthed prematurely. However, even though it was confirmed that his staff was in the office, they chose instead to remain behind a locked door instead of hearing the group’s concerns.
“We were obligated by conscience to speak out and urge an immediate vote, even when it meant going to jail,” said Newman.
The vote seemed on indefinite hold until March 25, when eight pro-life leaders, including Operation Rescue President Troy Newman, were arrested outside House Speaker John Boehner’s office while protesting the delay of a promised vote.
Operation Rescue has learned that this protest prompted a more urgent discussion that eventually led to new language that has cleared the way for a vote.
This comes on the same day that the New England Journal of Medicine released a study declaring that the new standard of viability is 22 weeks gestation, down from the outdated 24 week viability standard used by Planned Parenthood.
Yesterday’s efforts to speak with Speaker Boehner’s staff have led to the announcement that the vote has now been set for the week of the 2-year anniversary of the murder conviction of Philadelphia abortionist Kermit Gosnell, who killed babies born alive during shoddy late-term abortions that would be mostly banned under this new law.
“We are thankful that the vote on this crucial, life-saving legislation is moving forward and pray that it will spark a national dialogue on the barbarity of abortions on babies that can feel pain, and in turn, the barbarity of all abortions,” said Newman. “This is an important step on the way to ending abortion altogether and creating a society that values and protects life.”