Wichita, KS — Pro-life activists in Iowa and New Mexico have experienced incidents of vandalism over the past few weeks. The vandalism appears to target local activists who are related in some way to efforts by Operation Rescue to expose abortion in their communities.
“What we are seeing is a violent reaction born out of the increasing frustration of a failing abortion movement. Support for the pro-life position is increasing, while support for abortion is on the decline. Abortion clinics are closing and more abortionists are under investigation or facing criminal charges than ever before,” said Newman. “For those who commit violence against pro-lifers, we want them to know that our response is to pray for our enemies, but at the same time, we will not be intimidated into silence.”
In Albuquerque, New Mexico, Truth Truck and the home of a volunteer Truth Truck driver were vandalized after an unknown assailant egged them. This occurred in the first week of June. Perhaps not coincidentally, on June 11, 2010, a 17-year old pro-abortion blogger named “Clay” complained about the Truth Truck and discussed possible responses:

What should we do? Chain someone to their door? Egg their vehicles? Just march and be obnoxious? Should I find a female friend to take charge of the event? Please share thoughts and ideas.

A police report has been filed.
In addition to the Truth Truck presence, Operation Rescue has researched late-term abortions at Curtis Boyd’s Southwestern Women’s Options in Albuquerque and published a 5-part exposé revealing how plans to establish Albuquerque as the next late-term Abortion Capital of the world.
In Iowa, a Dubuque resident filed a police report after vandals spray-painted graffiti that favored abortion on the side of his home. Pro-lifer Allen Troupe was apparently singled out for his beliefs because he displays a sign from Dubuque Right to Life in his window that reads, “Planned Parenthood: Bad for Dubuque.”
Operation Rescue has worked with Dubuque Right to Life to oppose Planned Parenthood’s announced expansion of “telemed abortions” to Dubuque. Operation Rescue has filed complaints with the Iowa Board of Medicine and the Iowa Attorney General’s office asking for investigations of this dangerous push-button, remote controlled abortion pill dispensing scheme without an on-site licensed physician.
To add insult to injury, the local Dubuque newspaper has attempted to turn the obvious attack on a pro-life activist’s home into some kind of “Twilight Zone” kind of pro-life conspiracy to insult Planned Parenthood. At first, the Dubuque Telegraph Herald refused to publish the story about the vandalism. Blogger Jill Stanek reveals that e-mail communications and phone calls to the paper’s editor, Brian Cooper, show that his outlandish opinion was that the vandalism was conducted by a covert pro-lifer or someone without a view on abortion who was trying to make Planned Parenthood look bad.
“This editor’s support for abortion has so clouded his vision that he simply cannot cope with the reality of this attack,” said Operation Rescue President Troy Newman. “It is shocking that someone with such a warped view of reality is actually running a local newspaper.”
Attacks on pro-life supporters appear to be on the increase. In the past year, Operation Rescue’s headquarters in Wichita, Kansas, was vandalized twice. Death threats on Operation Rescue’s staff and their families have become common, forcing the implementation of extra security precautions. 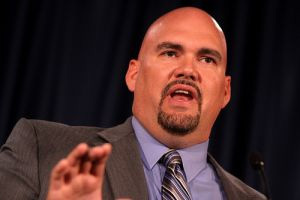 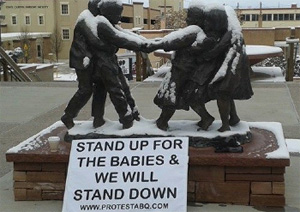