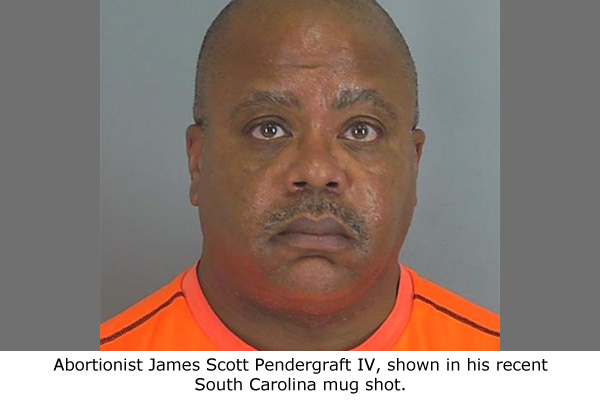 By Cheryl Sulleger
Spartanburg, SC – A trial in the case of Florida abortionist James Scott Pendergraft, IV, which was scheduled to begin last week, has been reset to begin the week of November 13, 2017.
Pendergraft and an accomplice were arrested on a highway near Spartanburg, South Carolina, on October 5, 2015, during a traffic stop in which Sheriff’s Deputies discovered illegal drugs and bloody, tissue-covered abortion instruments. This lead law enforcement to conclude that he was conducting an illegal abortion/drug business out of his van. Pendergraft is not licensed to practice in South Carolina.
Pendergraft was charged with 10 drug counts, including possession of sedation drugs used in abortions, LSD and marijuana.
Pendergraft’s case, which has been delayed several times already, was placed on the court docket for a jury trial beginning the week of July 24, 2017. However, the Spartanburg County Court takes the oldest cases on the week’s docket first. If the older cases take longer than expected, the newer cases are bumped to the next available space on the Court’s docket, which could be months away.
In the meantime, the State of Florida continues to battle Pendergraft’s appeal of the license revocation order for his three remaining abortion facilities. If Pendergraft is convicted in South Carolina, it is very likely that the state will prevail and his once formidable – but extremely dangerous – abortion empire will be shut down for good.
Operation Rescue will continue monitoring these cases.