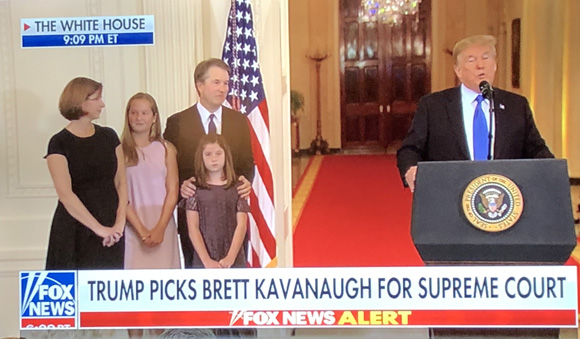 PRESS RELEASE
Washington, D.C. — President Donald J. Trump has nominated Judge Brett Kavanaugh to serve on the U.S. Supreme Court.
Operation Rescue announces its support for President Trump’s selection to replace retiring Justice Anthony Kennedy. Judge Kavanaugh will shift the court’s balance to a conservative perspective and provide long-awaited relief from the liberal judicial activism that manufactured so-called “abortion rights” out of thin air.
“President Trump promised pro-life supporters during his campaign that he would appoint justices that would respect and protect the most fundamental of human rights — the right to life. His pick of Judge Kavanaugh represents another promise kept,” said Operation Rescue President Troy Newman. “We plan to actively support this nomination in what is expected to be a contentious confirmation process.”
To the pro-abortion activists who plan to oppose the Kavanaugh confirmation, Newman has the following message.
“Elections have consequences. You are not entitled to a justice that will bow to your demands. Times have changed and a new day is coming when abortion will finally be relegated to the ash heap of history where this barbarism truly belongs. We will expose your corruption and disinformation at every turn. You will not win.”