In response to Ron Reagan Jr’s speech at the Democratic National Convention supporting destructive human embryonic experimentation, we are reposting an Editorial published in the San Diego Union-Tribune on January 27, 2000. Four and a half years later, the same arguments for destroying human beings at the embryonic stage are still being put forth. This editorial examines the morality of such destruction.
*****

By Cheryl Sullenger
San Diego Union-Tribune (January 27, 2000)
Ever notice how life sometimes imitates Star Trek? Upon reading a recent newspaper article about embryonic stem cell research, I was reminded of a Star Trek Voyager episode entitled “Nothing Human.” In this episode, set in the 25th century, Voyager crew member B’Elanna Torres is attacked by an intelligent, but very alien species who affixes himself to her vital organs in order to survive, endangering Torres’ life. The doctor soon discovers that if the creature is removed from Torres, it will die. To save the lives of his two patients, the doctor calls upon the aid of a holographic scientist, a duplicate of a doctor whose expertise in xenobiology is unsurpassed in the Alpha Quadrant. This scientist, it is soon discovered, gained his medical knowledge, through often brutal and lethal experiments on a subjugated race of people who suffered greatly due to his experimentation. His knowledge, gained from the deaths of countless innocent people, would certainly help save the lives of Torres and the alien being. However, Torres is appalled by the prospect of benefiting from such experimentation and rejects any treatment derived from research on unwilling human subjects, even if it costs her her life. Torres and the creature are eventually saved, but the Voyager doctor is left with a moral dilemma. Is it ethical to use research gained at the price of so much intentionally inflicted suffering and loss of life? In the end the scientist’s program is deleted along with any knowledge it contained. The price of that knowledge, counted in the lives of his dead and maimed research subjects, was just too high.

Now back to the year 2000 and embryonic stem cell research. Today, scientists at a California laboratory acquire human fertilized eggs discarded from In Vitro fertilization procedures. They allow the cells to divide until the embryo is perhaps several dozens of cells large. These embryonic cells have the remarkable ability to grow into any number of tissue types without the usual cellular aging that takes place in adult stem cells, which cannot be use as successfully. The embryonic cells are then stripped from the membrane that would soon become a placenta and are forced to grow into whatever tissue the scientists require. This technology has recently been hailed as a brilliant breakthrough that can benefit all of humanity. Animal organs, including eyes, have already been produced in this way. Soon, whole human organs may be grown for possible transplant, saving thousands of lives. But what of the cost? Each fertilized egg is a complete human being at the earliest stage in his life. If successfully implanted into a womb, a child would grow and thrive to full maturity. In reality, a person has to die each time new cells are harvested from a growing embryo. The cost of this research is innocent human life.
Researchers defend their actions by saying that the human embryos used in their experiments were discarded embryos that no longer served a purpose. There is danger in this line of reasoning. Scientists, with one sentence, have created a whole class of throwaway people based upon their personal lack of respect for the value of each human life. The quest for knowledge has blinded them to the fact that they are no different from the scientist in that Star Trek episode, to whom knowledge was everything and the lives of his subjects were nothing.
When each individual life is not valued, all life is devalued. We live in a schizophrenic society that chooses shampoo based on the fact that no animals were used in the testing of the product, but will in turn defend the potentially massive loss of human life caused by embryonic stem cell research and its application. Where will this devaluation stop? We have already seen the destruction of over 34 million lives through abortion because the unborn have been devalued. We are seeing the sick and elderly quietly euthanized in hospitals and nursing facilities, because their lives are deemed to no longer warrant such basic care as food and hydration. This callus disregard for human life is creating a cold, uncaring, and unconcerned society characterized by child abuse, mass murder, suicide and violence in the schools and work-places of America. Further degradation to the value of life cannot be tolerated. Another way must be found to solve the medical and societal problems that face us.
The brave new world of biotechnology in this year 2000 has met science fiction. Now it is time to ask ourselves the hard questions needed to maintain ethical integrity in our own time. Is the cost too high? If the cost is the life of even one innocent person then it must be determined, for our own sakes as well as for those who will come after, that the price is beyond our moral ability to pay. 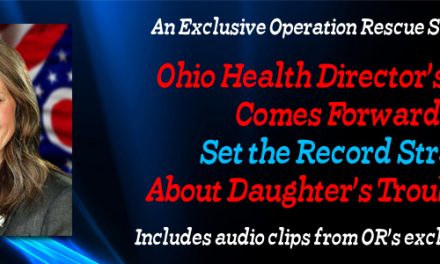