Topeka, Kansas – A three-person Ethics Panel has released a 164-page report recommending indefinite license suspension for Phill Kline, a former Kansas prosecutor who dared to investigate criminal conduct of abortion clinics during the hostile pro-abortion administration of former Governor Kathleen Sebelius.
“Kline’s investigations were attacked and hampered by a corrupt administration that was bent on protecting abortion on demand at any gestation for any reason,” said Newman. “During her time as governor, Sebelius packed every Board with those who would work aggressively to protect abortionists in Kansas, even to the point of helping them break the law. Sebelius owes her political career to money from the abortion lobby. She was protecting the proverbial goose that laid the golden egg. “
Sebelius now serves as Pres. Obama’s Secretary of Health and Human Services and is working feverishly to ensure that tax-payers continue to foot the bill for abortions through the new health care system.
The Kansas Disciplinary Administrator, Stan Hazlett, who prosecuted Kline’s ethics case, as well as the three members of the panel who heard the case, are all appointees of the pro-abortion Sebelius-appointed Kansas Supreme Court.
“The case was a set up from the start. This kangaroo court has done their part to destroy Kline and shield Planned Parenthood from the consequences of their alleged illegal activity,” said Newman.
The report comes just nine days before a Preliminary Hearing in the criminal case involving 107 criminal charges filed by Kline against Planned Parenthood for illegal late-term abortions and manufacturing evidence to cover up the crimes. That hearing is expected to determine whether Planned Parenthood will continue to trial or be dismissed. Attorneys for Planned Parenthood have often expressed that Kline’s investigation was so tainted that the case should not go forward.
“Follow the money. If Planned Parenthood is found guilty of these charges, it could mean the end of millions of tax dollars that the organization currently receives. Corrupt pro-abortion factions have stopped at nothing to tank this case, including ruining a good man’s career,” said Newman.
In their report, the Ethics Panel was particularly upset by Kline attaching files to a brief that proved Planned Parenthood manufactured evidence. They were also angry that Kline was interviewed on the O’Reilly Factory cable news program, and that he would not admit any of his conduct was wrong.
Read the Disciplinary Report 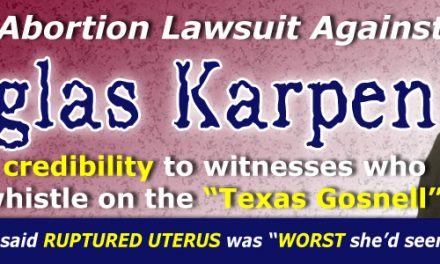