Wichita, KS – Judge Clark V. Owens, who will oversee abortionist George Tiller’s criminal trial, if the case proceeds, recently received low ratings by a group of Wichita attorneys. Owens was among several judges running for re-election that were rated by members of the Wichita Bar Association.
Last week, Owens announced that he would soon issue a ruling on a motion filed by Tiller as to the constitutionality of the late-term abortion law under which Tiller has been charged with 19 violations.
“This is a serious ruling that Judge Owens is about to make in the Tiller case. However, based on his low ratings by local attorneys, we don’t believe that he has exhibited the fairness or trust that is required of a judge who is ruling on such a controversial case where corruption is already suspected,” said Operation Rescue President Troy Newman.
Less than half of attorneys rating Owens – 46% — strongly agreed that Owens was ethical, and only 34% strongly agreed that he is fair.
While 42% strongly agreed that Owens demonstrates a good knowledge of the law, only 30% felt as strongly that he applies the law appropriately.
Owens also received low marks for being punctual and demonstrating a fair work ethic. Only 19% of those who responded strongly agreed that he demonstrated those qualities.
“Because of the long frustration with the lack of enforcement of Kansas abortion laws, the public needs to be reassured that the judge overseeing Tiller’s criminal prosecution is one known for fairness, ethics, and the appropriate application of the rule of law,” said Newman. “Owens is not that judge.”
Third time may not be the charm
Owens is the third judge of record on the Tiller case. Judge Gregory Waller, who received the third worst ranking from the local attorneys’ group, was the first responsible for the case. Operation Rescue released documents showing that Tiller’s attorneys and close associates had made maximum contributions to one of Waller’s political campaigns. The following day, Waller was off the case.
As presiding judge, Waller appointed Judge Anthony Powell, who recused himself from hearing the case based on negative comments he had made about Tiller while serving in the Kansas Legislature over ten years earlier.
“I have no doubt about my ability to rule impartially in this case,” Powell said at the time, adding that because those comments raised even the appearance of partiality, he decided to step down from the case.
Powell received significantly higher marks from attorneys than Owens and Waller.
Criminal case on hold
Owens has put the Tiller criminal case on hold since he heard oral arguments on November 2, 2007, in Tiller’s motion to have the second physician requirement in the Kansas ban on post-viability abortions declared unconstitutional. At that time, Owens indicated that his decision would take “several weeks.”
“It has been over eight months, and only now that the grand jury has returned without indictment does Owens feel it is time to rule,” said Newman. “There has been far too much impropriety related to Tiller cases for us to feel easy about that.”
Owens has indicated that he will issue a ruling before July 29, when a status conference is scheduled and a “firm” trial date is expected to be set.
Can Owens apply the law ethically and with fairness?
Just last week, two physicians stopped providing the second signature for Tiller’s post-viability abortions after Operation Rescue released information about them and the medical clinic where they were seeing Tiller’s patients.
“Just because Tiller has a hard time finding anyone to approve of his late-term abortions, that certainly does not mean the law is over-burdensome. It means that the law works,” said Newman. “That law was enacted to protect viable babies from abortion except under the most rare and dire medical emergencies. The fact that Tiller can’t find doctors to legally concur that these abortions are medically necessary confirms that he is trying to do abortions outside the scope of the law that no reputable physician wants to have anything to do with. The problem has been trying to find anyone who will actually enforce the law when it is broken.”
“Upholding the second physician requirement will not present an undue burden to anyone except those who are trying to illegally abort viable babies for trivial reasons,” said Newman. “If Kansas is considered the Late-Term Abortion Capital now, removing that safeguard in the law will only open the floodgates.”
Abortionists already regularly visit Kansas in order to financially profit from doing expensive late-term abortions that are illegal in their home states. Most of the late-term abortions in Kansas are done on out-of-state women seeking to avoid abortion laws where they live. This condition exists not because Kansas lacks abortion laws, but because those laws are not properly enforced.
“We are concerned about Judge Owens’ ability to appropriately apply the existing law ethically and with fairness,” said Newman. “The low rating Owens received from local attorneys only compounds that concern. This should be an open and shut case, but given the circumstances, we will be very surprised if the criminal charges against Tiller survive the next few days.” 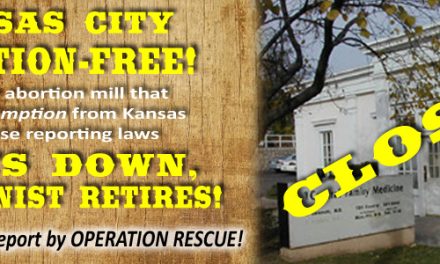 ‘These Are the Times That Try Men’s Souls’

Board Votes to Finalize Revocation of Tiller Associate’s License