Topeka, KS — For the second year in a row, the Kansas legislature has passed the Huelskamp Amendment that would stop tax dollars from funding Planned Parenthood in Kansas. This particular Planned Parenthood currently faces 107 criminal charges – 23 of which are felonies – all related to the commission of illegal late-term abortions.
Right now, Planned Parenthood is getting hundreds of thousands of tax dollars each year from the state of Kansas even though it stands accused of over a hundred counts of criminal conduct.
It’s shocking but true. Without our tax dollars, this Planned Parenthood would struggle to say in business.
In fact, last year, Gov. Mark Parkinson, an avid abortion supporter, not only vetoed this budget amendment, but increased Planned Parenthood’s funding by a outrageous 21.1%. He did so even after two pro-life legislators released an undercover audio recording provided by Operation Rescue that showed Planned Parenthood was still willing to violate the law by concealing an incident of child rape and even handing over birth control pills to help the rapist cover up his crimes!
To add insult to injury, Parkinson then completely defunded pro-life pregnancy help centers, just to insure that struggling abortion mills stayed in business.
This year, Kansas is so cash-strapped that it is raising taxes to burdensome new levels – all so they can give abortionists at Planned Parenthood another raise.
“This gross injustice – not to mention the lack of common sense on behalf of political hacks that are in bed with the abortion lobby – makes me sick with ‘righteous indignation,’” said Operation Rescue President Troy Newman. “We simply cannot allow that happen again this year.”
The Huelskamp Amendment, introduced by pro-life hero Sen. Tim Huelskamp, has passed the legislature and now sits on Parkinson’s desk awaiting his signature.
It is imperative that members of the public contact Gov. Parkinson’s office today and ask him to allow the Huelskamp Amendment to become law.
Please call the Governor’s Office toll free at (877) 579-6757 or e-mail him by clicking here.
“It is simply unconscionable that the taxpayers should be burdened with footing the bill for Planned Parenthood’s baby-killing business – especially while it is facing over 100 serious criminal charges related to illegal late-term abortions,” said Newman. “Please call or write Gov. Parkinson today!”
Doing more: 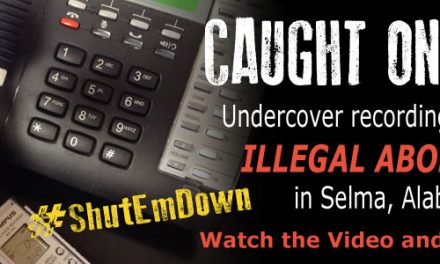