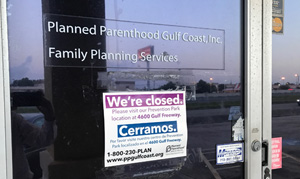 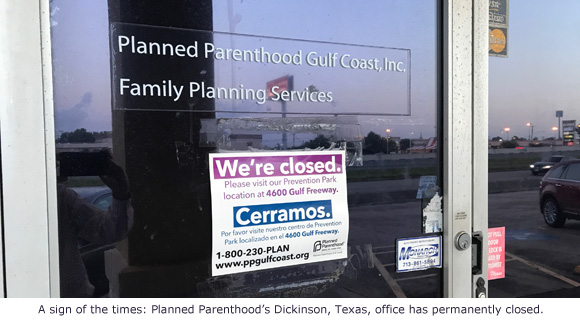 By Cheryl Sullenger
Dickinson, TX – Planned Parenthood Gulf Coast has permanently closed its clinic in Dickinson, Texas. While the facility did not offer abortions, it did refer women seeking abortions to their large surgical center in Houston.
A sign on the door of the shuttered Planned Parenthood office, photographed by a local activist last week, announced the closure and referred all clients to the Houston abortion center on Gulf Freeway.
That sign could be considered a sign of the times. This closure is one of nearly 20 closures of Planned Parenthood offices nationwide and continues the organization’s trend of downsizing facilities that either do not offer abortions or are not turning a profit. Decreased demand for Planned Parenthood services continues to be a driving factor in the closures.
“We are encouraged to see closures like this one in Texas and across the nation,” said Troy Newman, President of Operation Rescue. “Any time a Planned Parenthood facility closes, it is great news for women and babies, who have one less business marketing abortions to them.”
Meanwhile, the Texas State Legislature continues to do its part to establish a Culture of Life in Texas that protects women and taxpayers from exploitation by the abortion industry.
Undaunted by the 2016 U.S. Supreme Court ruling that overturned many women’s safety provisions previously enacted, the legislature continues to press forward with pro-life legislation.
So far, Texas has advanced bills that would require greater reporting of abortion complications, separates abortion coverage in insurance policies, and prohibits state and local government agencies from contracting with abortion businesses. Earlier this year, the Texas Legislature passed a bill that requires abortion facilities to bury or cremate the remains of aborted babies.