Washington, DC – It is now being widely reported that Gov. Kathleen Sebelius failed accurately report to the Senate Finance Committee the true amount of campaign contributions given to her by late-term abortionist George Tiller. In fact, documents show that the amount was nearly three times what she reported.
“In the wake of being exposed, Sebelius is attempting to backtrack by saying her untrue answer was an ‘oversight.’ The only ‘oversight’ by Sebelius has been of the truth,” said Operation Rescue President Troy Newman. “Sebelius has worked overtime to minimize her relationship to Tiller. Her underreporting of his contributions to her campaigns is just another example of this disingenuous behavior.”
“We continue to catch Sebelius attempting to deceive the American people. A trust has been broken, and the public cannot now put confidence in anything she says. How many lies does it take before people realize that she is just not fit to serve?”
In addition to the campaign reporting discrepancy, Operation Rescue has released documentation showing that Sebelius did not tell the truth about a dinner she hosted for Tiller in April, 2007. Sebelius says that the dinner was an auction prize bought by Tiller in 2006. However, her spokesperson, said in a written statement that the dinner was purchased in 2005. Neither story stands up under available documentation. [Read full story with documentation.]
“Ironically, Sebelius’ relationship with Tiller helped launch her career, and now her attempts to minimize that relationship would very well be her undoing,” said Newman. “You can’t dance with the devil and not expect to have to pay the piper.”
View OR’s Sebelius fact page. 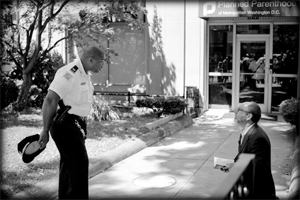