Rutland Banned From Abortions But Retains License For Now San Diego, CA – Abortionist Andrew Rutland has been ordered by a judge to stop doing abortions and delivering babies until the California Medical Board and determine whether his medical license should be permanently revoked.
The CMB asked for an emergency suspension of Rutland’s license after he killed a woman during a botched abortion in San Gabriel and violated his probation by doing abortions without the supervision of a second physician in Chula Vista and Santa Ana.
Administrative Judge James Ahler allowed Rutland to keep his license so he could continue to see patients for consultations. However, Deputy Atty. Gen. Douglas Lee questioned Rutland’s professional judgment, noting repeated negligent acts committed by him that led to the death of 30-year old Ying Chen during a second trimester abortion.
Judge Ahler agreed that if Rutland continued to do surgeries and deliveries, he “presents a risk of danger and there is a likelihood of injury to the public.”
Lee pointed out that Rutland has a history of dishonesty and corruption. He has lied to patients and authorities repeatedly, according to the formal revocation petition filed against him on Christmas Eve.
“Rutland is a proven liar. How do we know he will comply with the judge’s order to stop doing abortions? Who is going to enforce this order? Are the authorities simply going to take him at his word?” said Operation Rescue President Troy Newman. “We are outraged that Rutland’s license was not fully suspended. This decision places women’s lives at risk.”
Also present during yesterday’s hearing were Scott and Kathy Broussard of San Juan Capistrano, whose daughter, Jillian, died as a result of a forceps delivery by Rutland. That incident led to the revocation of Rutland’s license in 2003. They expressed disappointment at the reinstatement of his medical license in 2007 and at yesterday’s decision.
“I think his victims and the public needed to get full peace of mind today, and they didn’t,” Kathy Broussard told the Orange County Register. “He still has a practice in Anaheim. He’s still allowed to do gynecological exams and consultations. It’s appalling.”
The California Medical Board will meet at a later date to determine if Rutland’s license should be permanently revoked.
View background with link to revocation documents. 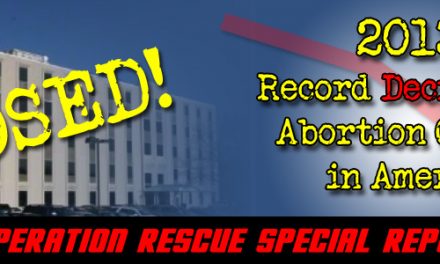