South Bend, IN – President Barack Obama delivered a speech yesterday during the Notre Dame Graduation commencement ceremony that was rife with heretical views of Christianity.
“It is obvious from Obama’s speech that matters pertaining to religion and moral issues are still above his pay grade,” said Operation Rescue President Troy Newman. “As an ordained elder in the Presbyterian Church in America, I can say with conviction that Obama holds apostate views on the roll of Christianity in the world and the moral issues that spring from those teachings such as, abortion, stem cell research, and other matters.”
Obama told the 2009 graduating class of Notre Dame that of the problems facing the world today, “no one person, or religion, or nation can meet these challenges alone.”
This statement is in direct contradiction to orthodox Christianity which teaches that Christians are the “light on the hilltop” that illuminates society with the wisdom of God, apart which there can be no answers to the world’s problems.
Obama urged those who disagree on abortion to “work together to reduce the number of women seeking abortions by reducing unintended pregnancies, and making adoption more available, and providing care and support for women who do carry their child to term.”
Yet, Obama’s policies of providing tax-funding for abortion here in this nation and abroad only work to encourage and increase abortion. In fact, the ones who are currently working to do the things recommended by Obama are almost exclusively Christian pro-life groups.
Obama further stated, “Let’s honor the conscience of those who disagree with abortion, and draft a sensible conscience clause…” But Obama has threatened to eliminate the conscience clause that would allow doctors and hospitals to refuse to commit abortions based on religious convictions.
Obama referred to “Open Hearts. Open minds. Fair-minded words.”
“Obama would have Americans open their hearts and minds to the shedding of innocent blood, and would cloak the slaughter of innocent children in ‘fair-minded’ words,” said Newman. “Yet the Bible teaches us that we should rescue those who are being led to the slaughter and give practical assistance to those who are in need. Obama attempts to deceive the people into thinking that we should, for the sake of unity, turn a blind eye to greater evil of abortion to focus on social programs that do not solve the root problem of decriminalized child-killing in our nation.”
“If there was one phrase to describe Obama’s presentation at Notre Dame it would be ‘apostate hypocrisy,’” said Newman. “Obama should refrain from making comments on religious and moral matters and should confine his remarks to subjects with which he has more familiarity.” 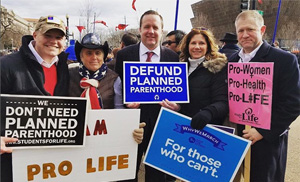 From Enactment to Enforcement: Supreme Court Ruling Could Have Far-Reaching Impact On Existing Law