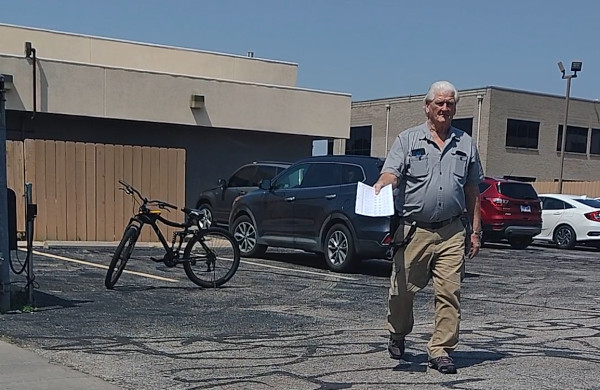 Wichita, KS – Pro-life activist Jennifer McCoy has received a protection order against Carl Sweeney, a security guard employed by the Trust Women abortion facility in Wichita, Kansas, after Swinney handed her some papers claiming they were “contaminated material.”

Because McCoy is frequently singled out by Swinney for harassment, she took the threat seriously.

The incident took place on June 24, 2021. The protective order was issued a few days later on July 7.

Carl Swinney has long been a concern to local pro-life activists.  He is a known alcoholic who was convicted of three counts related to drunk driving a few years ago.  He temporarily lost his driving privileges due to his drinking problem.  Because of transportation and personal issues, for years he has lived at the abortion facility and lists it as his home address.

“I wonder about his mental health living at such a place,” said Operation Rescue President Troy Newman.  “His behavior has always been erratic and threatening for the twenty years I have known him.  The clinic’s owner and administrator, Julie Burkhart, is aware of his dangerous behavior, and I believe she not only tolerates it, but encourages it.”

She requested that Swinney be banned from threatening to shoot her or engage in “biological terrorism.”  McCoy had good reason for wanting such protection.

On March 29, 2020 – the day before Kansas was ordered into lockdown due to the China Virus — Swinney brought a bag out of the abortion facility and, in McCoy’s presence, handed it to Mark Gietzen, Director of the Kansas Coalition for Life, which schedules the pro-life presence at Trust Women every hour they are open.

The bag contained vomit from a sick woman who had been admitted to the abortion facility.  Police were notified, but nothing came of the complaint.

During the most recent incident in June, McCoy had been offering assistance to women seeking abortions outside the Trust Women abortion facility when papers on a table used by pro-life activists had blown into the abortion facility’s parking lot.  Swinney picked them up, took them inside the abortion facility, then returned to the public sidewalk, handing the papers back to McCoy while stating he made sure they were contaminated.

Swinney did not specify what he used to allegedly contaminate the papers, but the abortion facility generates infectious medical waste and human remains in the process of conducting abortions through 21.6 weeks gestation.  This made the threat plausible, especially considering the vomit bag incident last year.

But McCoy had another reason for seeking a protective order against Swinney.

In 2016, when the abortion facility was known as the Southwind Women’s Center, McCoy was filming suspicious activity from a public sidewalk, when Swinney attacked her while her young children looked on, twisted her arm, and caused an injury that continues to cause her chronic pain.

Swinney was arrested and charged with battery, but struck a plea deal to avoid prison. He was ordered to attend an anger-management class in what amounted to a slap on the wrist.  He was ordered to have no contact with McCoy. That order expired in May 2021.

“I do not believe it is a coincidence that Carl Swinney’s harassment of Jennifer McCoy resumed just after her former protection order expired.  It is obvious that he has issues that make him unstable. His outrageous threatening behavior with his firearm is unconscionable.  Things are always tense outside abortion facilities, and the threat that he would one day shoot a pro-life supporter at that abortion clinic is very real. The authorities must not wait until that happens before acting to protect the public from him,” said Newman.

Swinney is scheduled to appear in court on July 22, 2021, at 9:00 a.m. for a hearing on the incidents that led to the protective order.