Annapolis, MD — A press conference will be held in Annapolis, Maryland tomorrow to discuss recent events that include the suspension the medical licenses of three Maryland abortionists, one New Jersey abortionist, and the conviction of manslaughter of a fifth abortionist in Massachusetts.
Press Conference Details:

Yesterday, Massachusetts abortionist Rapin Osathanondh pled guilty to one charge of manslaughter for his criminal negligence in the abortion death of Laura Hope Smith in 2007. He is scheduled to be sentenced today to three months in the County jail, four months of house arrest, and three years of probation.
“Osathanondh’s mansaughter conviction should encourage prosecutors across the nation to criminally charge other abortionists who are breaking the law,” said Operation Rescue President Troy Newman. “It is the only way to protect women from suffering at the hands of these dangerous and predatory abortionists, on which traditional forms of discipline simply do not work.”
Last week, Maryland suspended the medical license of Romeo Ferrer, who killed Denise Crowe in 2006, declaring that Ferrer presented such a danger that “the public health, safety or welfare require emergency action in this case.”
Maryland also suspended the medical licenses of Utah abortionist Nicola Riley and Delaware abortionist George Shepard for their participation in an illegal late-term abortion scheme that landed one woman in the hospital with life-threatening injuries. That scheme was operated by the notorious Stephen Chase Brigham, whose New Jersey license has been suspended effective Thursday.
The pro-life groups plan to discuss the crisis of illegal abortion activity and other abuses that currently define the abortion industry, and will call for criminal charges against the four abortionists who were suspended last week. 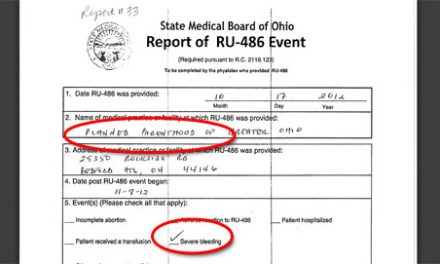