By Cheryl Sullenger
Oklahoma City, OK – Oklahoma abortionist Naresh Patel pled guilty on Friday to charges he committed fraud when he sold abortion pills to three non-pregnant undercover officers after Operation Rescue filed a complaint against his that resulted eventually in his arrest in December, 2014.
Patel was ordered to serve 18 days in a private correctional facility, pay a $20,000 fine, and serve 10 years of probation.
Patel surrendered his medical license and can never practice medicine again, according to his plea agreement. His abortion clinic has permanently closed.
Patel must also pay court costs, $2,000 in restitution and a victim’s compensation assessment of $100.
“We are excited to announce that is reign of terror has now come to an end because of our complaint that brought him to the attention of the Attorney General’s office,” said Troy Newman, President of Operation Rescue. “This predatory abortionist will never again be able to operate an abortion clinic, exploit another woman, or kill another baby. We are proud to have been a part of bringing his reign of terror to an end.”
Operation Rescue had filed complaints with the Attorney General’s Office and the Oklahoma Medical Board against Patel in the spring of 2014 after discovering evidence of abortion abuses in trash from his office supplied by a confidential informant. Cooperation between those two agencies led to Patel’s arrest.
“Patel has managed to escape justice before, and this time, he must be held accountable for his crimes,” said Operation Rescue President Troy Newman. “His greedy exploitation of vulnerable women must come to an end. If anyone belongs behind bars, it is Naresh Patel.”
In 1993, Patel was charged with one count of “forcible oral sodomy” and one count of sexual battery after a patient alleged that he had sexually assaulted her on an examination table prior to an abortion. She then recorded two phone conversations with him in which she alleged that he asked if she was angry about the assault and apologized for it.
Three victims came forward and told of their horrific encounters with Patel, but somehow the jury failed to convict him.
Patel was also previously disciplined by the Oklahoma Medical Board for Unprofessional Conduct for “failing to maintain dispensing records for dangerous drugs and keep complete and accurate records of purchase and dispensing of controlled drugs” and for injuring a woman during a botched abortion.
In 1993, Patel admitted that he dumped the remains of nearly 60 babies that had been aborted at his clinic in a field near Shawnee, Oklahoma, and had attempted to burn them but only the plastic bags around the remains caught on fire. The bodies were discovered by two passers-by. Patel’s excuse that he could not find a service to take away the remains lacked credibility. Because at that time there were no laws in Oklahoma regarding the disposal of aborted baby remains, Patel was never charged.
Patel was also recently sued for sexual harassment after an employee claimed that he repeatedly asked her for sexual favors. She alleges he forced her to conduct grisly tasks at his abortion facility after she refused her advances and that she quit after he attempted to rape her at his home.
Read Operation Rescue’s original Patel investigation report with a link to the complaint that brought this criminal to justice! 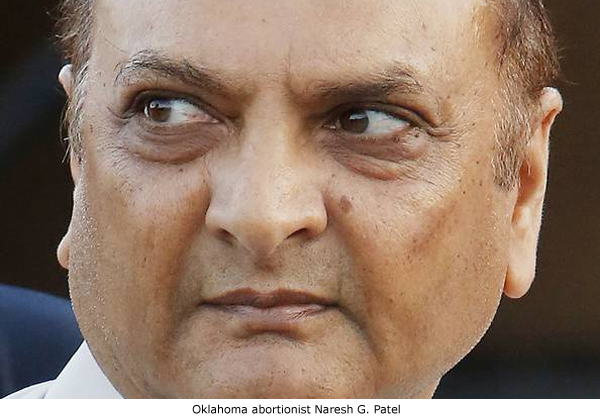