Ohio Abortion Clinic Closed For Over A Dozen Health Violations

Cleveland, Ohio — The Ohio Department of Health has ordered that a late-term abortion clinic close due to “over a dozen code violations.” The Center for Women’s Health in Cleveland was informed that its license would not be renewed after inspectors discovered that the clinic was not meeting even the most rudimentary of standards, such as taking a patient’s temperature and blood pressure before risky late-term abortion surgeries.
Abortionist Martin Ruddock, who ran the abortion mill that would do abortions — including partial-birth abortions — through the second trimester of pregnancy, did not believe his clinic should have been subject to the state laws that regulate ambulatory surgical care facilities, even though his ads described his clinic as such.
Ruddock did not have an emergency transfer agreement with a local hospital, and endangered one woman with abortion complications when he had difficulty finding a hospital to admit her.
Ruddock’s clinic is one of nearly a dozen abortion mills to close across the country since June. Most were closed by various state authorities, which had uncovered violations that included the delivery and alleged murder of a live baby, workers aborting women without medical licenses, and the misuse of the hazardous abortion drug RU 486, among other charges.
“The closure of Ruddock’s clinic shows that the implementation of standards are effective at stopping abortion until it can be banned nationally. Standards are useful tools that are putting abortionist clinics out of business in droves,” said Operation Rescue President Troy Newman. “As a result, our land is not only a safer place for women, but also for the child in the womb.”
“Arrogant abortionists, such as Ruddock, will never adhere to the laws because they somehow think they are exempt from the same rules everyone else must follow. Their unwillingness or inability to follow the law has become their undoing,” said Newman.
Abortion mills have been closed for unsafe conditions in Ohio, Alabama, Florida, and California.
However, in Kansas, the Board of Healing Arts continues to ignore the death of a teenager last year during a botched third-trimester abortion, which included the documented misuse of RU 486. A similar misuse of RU 486 led to the closure of an Alabama abortion clinic earlier this year. The Kansas Board also refuses to deal with the filthy, roach-infested conditions that have been uncovered at two Kansas abortion mills.
“Although the trend is toward states clamping down on their outlaw abortionists, we still have some work to do in others,” said Newman. 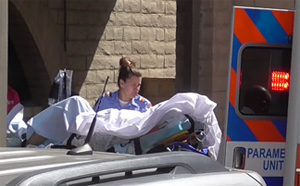