Chicago, IL — New Year’s Eve was hardly a time for celebration for at least one woman, who had gone to a Chicago abortion facility earlier in the day to end the life of her child.

Not only did her baby die, but the abortion resulted in a major medical emergency that could have cost her own life.

According to the 911 records, which were provided to Operation Rescue by the Pro-Life Action League, the 27-year-old woman suffered an injury to her womb during the abortion at Family Planning Associates, located on West Washington Boulevard in Chicago.

“We have a patient who just had a surgical abortion.  We believe that she has an injury to her uterus, and we need an ambulance to go to Northwestern Hospital,” the caller said.

The woman was under sedation at the time of the call and likely did not yet know that she was about to be sent to the hospital with a potentially life-threatening injury.

The Family Planning Associates caller indicated that the clinic staff would attempt to bring her out of sedation by the time the ambulance crew arrived.  The 911 dispatcher instructed her to have a nurse ready to ride along with the Fire Department ambulance should the woman remain sedated.

A lacerated or perforated uterus is a potentially life-threatening injury.  Depending on the severity, it could result in emergency surgery or even hysterectomy.

This is the eleventh known medical emergency that required ambulance transport from this abortion facility in the past three years.

“I’m sure that no woman ever walks into an abortion facility thinking she will suffer a botched abortion or end up sterile, but this happens more often than people think,” said Troy Newman, President of Operation Rescue, whose organization has documented hundreds of abortion-related medical emergencies.  “We want women to know that no matter what the abortion businesses say, abortion is not safe. Women seeking abortions are literally rolling the dice with their health future and their lives. We pray instead that pregnant women will seek out life-affirming help with whatever challenges they face.  It may just save them much grief in the end.” 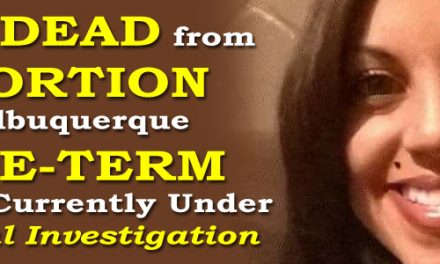