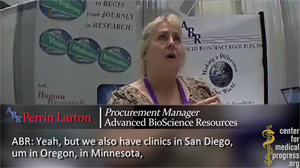 By Cheryl Sullenger
Washington, DC – Several major developments over the past few hours have brought forth evidence that Planned Parenthood indeed has profited from the sale of aborted baby tissue, but also is stonewalling both criminal and Congressional investigations.
A new video released today by the Center for Medical Progress focuses on clips of discussions with Advanced Biosciences Resources, Inc. (ABR), the oldest body parts procurement company in the U.S. Founded in 1989 by Linda Tracy, ABR has partnered with numerous Planned Parenthood affiliates around the country.
Abortionist Katherine Sheehan, Medical Director for Planned Parenthood Pacific Southwest, told a CMP actor posing as a representative of a Tissue Procurement Organization (TPO) that her organization has had a business relationship with ABR supplying fetal tissue to them for over ten years. Sheehan noted that her Planned Parenthood Affiliate has just renegotiated their contract with ABR.
Planned Parenthood Pacific Southwest, based in San Diego, California, is a high volume abortion provider that conducts abortions up to 24 weeks. TPOs covet second trimester fetal tissue particularly in the 18-22 week range.
Last week, Cecile Richards, CEO of Planned Parenthood Federation of America, sent a letter to Congressional leadership admitting that there was one Planned Parenthood affiliate working with a TPO in California that also had a fetal tissue supply relationship with the University of California. Richards indicated that this affiliate is paid $60 per tissue specimen.
These admissions implicate Planned Parenthood in crimes.
That affiliate has now been identified as Planned Parenthood Pacific Southwest, which maintains long-time relationships with ABR and the University of California San Diego.
CMP Executive Director David Daleiden sent his own letter to Congressional leadership yesterday noting that if multiple organs are harvested from a single abortion, Planned Parenthood could make a substantial amount of money for essentially doing nothing since ABR employees immediately receive the fetal tissue so the work of harvesting, packaging, and transporting the tissue.
Daleiden stated in that letter:

Therefore, records of PPPS’s relationship with ABR for the past 10 years will be highly relevant to the Committees’ inquiries. In particular, a comparison of this affiliate’s contracts with ABR before and after the “renegotiation” mentioned by Dr. Sheehan will be enlightening. ABR’s procurement logs, records of payment to PPPS or officers, and communications between PPPS or ABR and Planned Parenthood’s national office will also be key pieces of evidence.
The fact that other Planned Parenthood affiliates, according to Richards, have received similar payments from TPOs for each harvested fetal tissue specimen raises serious questions that can be answered with analogous documents from those affiliates and the national office.

“Let the subpoena’s begin!” said Troy Newman, President of Operation Rescue who also sits on the Board of the Center for Medical Policy. “We encourage Congress and law enforcement in states where Planned Parenthood has sold aborted baby remains to get the evidence as quickly as possible. Planned Parenthood has already attempted several dirty political tricks to get this scandal to go away, including lying to the American people. Because Planned Parenthood is so untrustworthy, it is important to secure the evidence as soon as possible.”
There is reason for concern.
Daleiden stated in his letter to Congressional leadership:

Instead of practicing transparency about the fetal tissue supply that Planned Parenthood claims to be so “proud” of, the organization and its allies are engaging in a pattern of stonewalling Congress and law enforcement and attacking whistleblowers with false and unsubstantiated calumnies.

Planned Parenthood released a spurious “analysis” of CMP video that was conducted by a radical leftist opposition research organization, Fusion GPS that has documented credibility issues. That organization was paid by Planned Parenthood to find a way to discredit the videos as well as members of the CMP. The video was “analyzed” using unscientific methods by another person, Grant Fredericks, who was caught on the record fabricating his “expert” experience.
“Planned Parenthood is hoping that America falls for their ‘smoke-and-mirrors’ effort to deflect attention away from their own apparently criminal conduct,” said Newman.
But the video evidence, along with documentation made public by the CMP speaks for itself. 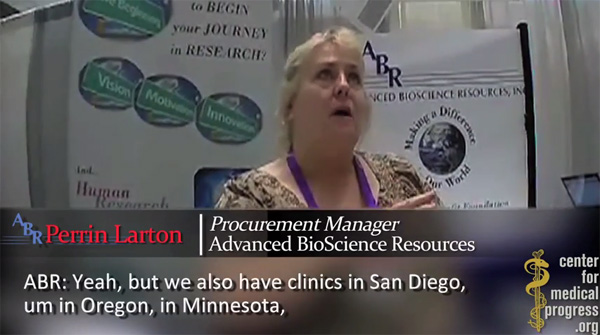 In today’s video release ABR Procurement Manager Perrin Larton discusses the trade in fetal tissue with an undercover CMP journalist.
“And you know what the really weird thing is? Embryonic [stem cell research], there is still a lot of controversy about that, you know. But then fetal kind of got lost in the mix. It was never outlawed.”
She noted that while Federal funding was cut off from embryonic stem cell research years ago, Federal funding kept flowing to those engaged in experimentation involving fetal tissue. According to the National Institute of Health’s website, an estimated $280 million federal tax dollars went to fund research involving human fetal tissue from 2011-2014. Another estimated $153 million is expected to be disbursed over the next two years. Federal tax money has also resumed in the human embryonic stem cell experimentation field as well.
“There is money to be made in the human tissue trade,” said Newman. “Yet that trade has flown under the radar for decades and evolved into a culture that views human life as a product that can enhance the bottom line.”
But recent political victories for the pro-life movement that have resulted in tighter abortion clinic oversight and decreased abortion numbers has TOPs like ABR worried.
“Now they’re trying to, um, make abortion illegal,” said Larton. “And that’s where we get our tissue.”
Larton admitted that ABR harvests fetal tissue from Family Planning Specialists, an Oakland abortion clinic not affiliated with Planned Parenthood. That clinic is operated by Jackie Barbic and does abortions through 21 weeks and guaranteed that the fetus was not given digoxin, a drug that induces fetal demise before the abortion extraction begins. This raises concerns that babies are being born alive at abortion clinics and barbarically killed for their organs.
While Larton said that the idea is not to have live births, she shockingly admitted that intact, living babies have sometimes “just fell out” during preparation for abortions.
However, Larton also lamented that more often, the abdomens of the babies get “ripped up” as the abortionist grabs whatever he or she can find and starts pulling the living fetus apart.
“Whenever we have a smooth portion of liver, we think that’s good,” she said.
Larton said that ABR also has contracts with abortion clinics in San Diego, Oregon, and Minnesota, but “will soon be starting” at clinics in New Jersey and Philadelphia.
StemExpress founder, Cate Dyer, has also admitted that her TPO contracts with abortion clinics numbering in “triple digit,” half of which are Planned Parenthood affiliates.
Meanwhile, Cecile Richards continues to represent Planned Parenthood’s involvement in the fetal tissue trade as comprising only 1% of her affiliates.
“Someone is lying here about Planned Parenthood involvement,” said Newman. “Dyer has no reason to lie to the CMP actors that she thought were abortion ‘champions.’ That leaves Richards, who is trying desperately to underplay Planned Parenthood’s involvement in what is essentially a black market in baby parts.”
The fact that these clinics are compensated financially is without question. StemExpress’ Dyer admitted that she pays abortion clinics money in exchange for fetal remains. Dyer also said that ABR has some abortion clinic staff on their payroll in an “advisory role.” These people do not participate in any of the procurement duties that would qualify for reimbursement under the law. That means ABR is buying favor inside abortion clinics with staff who are pocketing the money, which is clearly illegal.
It is illegal to sell human fetal tissue for profit, to alter abortion procedures to ensure organs will be suitable for sale, or to obtain tissue without proper consent. Daleiden’s letter to Congress indicated there is evidence that Planned Parenthood is violating these laws and more.
“It would be unconscionable to allow Planned Parenthood to hold themselves above the law and human decency, with their barbaric abortion practice subsidized by a half-a-billion taxpayer dollars each year,” Daleiden wrote.
“Operation Rescue continues our call for criminal prosecutions of Planned Parenthood and for Congress to completely defund the abortion giant,” said Newman. “And while Congress is at it, they should also include a Federal funding ban on the unethical experimentation on human embryos and aborted baby remains.”