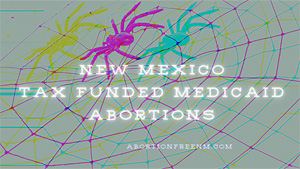 Albuquerque, New Mexico – Newly obtained Medicaid data by Abortion Free New Mexico reveals that from 2017-2019 state tax payers paid $791,123.32 for 5,897 abortions. The data was acquired through a public records request and also includes the names of 95 doctors, midwives and nurses who were paid by the state for the procedures. In addition to free-standing abortion facilities, nine hospitals were also paid for abortions through New Mexico Medicaid.
​
New Mexico is one 16 states that uses state tax dollars to fully fund abortions, because of the supreme court ruling in New Mexico Right to Choose/NARAL v. Johnson. The court ruled, in part, that the life of the unborn child is not compelling enough to outweigh the special interest of the mother. For this reason, New Mexicans are forced to foot the bill for low income women who qualify for New Mexico Medicaid and choose to have an abortion. It is a reality that infuriates many people of faith and conscience who would rather see their hard earned money used to promote life and provide legitimate help and resources to low income women with unplanned pregnancies.

Bud Shaver of Abortion Free New Mexico issued the following statement, “New Mexico tax payers should be outraged that our hard earned tax money from 2017-2019 was spent to fund 5,897 abortions at a staggering cost of $791,123.32! American’s fought to gain our independence from tyrants in 1776, in part, due to taxation (of 3 pence per pound on tea) without equal representation. How much more egregious is it that our tax dollars are being used to fund the killing of innocent children without our ability to refuse? The New Mexico Supreme Court ruling,

New Mexico Right to Choose/NARAL v. Johnson foisted a tyrannical precedent upon the tax payers of New Mexico without any due recourse to remedy this unjust burden. Furthermore, with New Mexico ranked as one of the poorest states in the country, surely there are better ways that New Mexico tax dollars could be spent to help low income mothers rise up out of poverty then simply providing them with abortions. Instead of providing reasonable solutions, the New Mexico Supreme Court, unfortunately, has misappropriated our tax dollars to eliminate poor children through Medicaid funded abortions.”

Southwestern Women’s Options, Albuquerque’s late term abortion facility, where abortions are performed through all nine months of pregnancy received the most money $340,773.61 out of the five abortion facilities in the state. Southwestern Women’s Options employs abortionists Shelley Sella who received $147,697.50 and Carmen Laundau who received $102,874.50 both of whom are at the top of the list in terms of abortion numbers and payments received. Sella is a resident of California who travels to New Mexico to abort babies in the latest stages of pregnancy. Landau lives in New Mexico, but received her medical degree from Communist Cuba. Southwestern Women’s Options performed 1,957 Medicaid funded abortions, each one representing a innocent child’s life.

The University of New Mexico- UNM, which has its own off-campus free standing abortion facility, received the second highest payments totaling $300,858.91 but actually performed 2,686 abortions, which was 729 more abortions than Southwestern Women’s Options during the same three year period. The data showed many medical doctors that were affiliated with UNM, presumably residents, who have since moved on from New Mexico and now practice in other states. This confirms what Abortion Free New Mexico has stated for years, that UNM is at the heart of the New Mexico abortion cartel. Their abortion training and residency training programs are a catalyst for what the abortion industry hopes will be responsible for raising up the next generation of abortion providers.
​
Thankfully, the numbers of abortion providers continues to be on the decline. Not every OB-GYN doctor is willing to betray true medicine by offering abortions in their offices.

The Women’s Specialists of New Mexico practitioners that  were reimbursed for 81 medicaid funded abortion procedures in addition to the physicians affiliated with Lovelace Medical Group were the most surprising. One doctor alone at Lovelace, Regan Riley performed 70 abortions! Lovelace has been known to be more pro-life friendly and many were under the impression that abortions were not performed in their facilities. This medicaid data proves otherwise and should be cause for concern in the pro-life community. The Medical Director of Women’s Specialists of New Mexico, Steven Gough, MD performed 8 abortions and shockingly he brags in his bio that his hobby is, “learning the bass guitar so he can play in a worship band at church.”

Here are the hospitals where abortions occurred and their abortion totals:

Abortion Numbers Statewide Are On The Decline

Over the course of the three year period, abortions that were covered by New Mexico Medicaid did decline each year. In 2017, there were 2,293 performed. In 2018, the number dropped to 2,109 and in 2019 was the steepest drop with 1,495 abortions that Medicaid covers. Tax payers can only hope that the numbers continue to decrease as more women choose life for their babies.

New Mexico tax payers deserve to know how their tax dollars are used as well as which practitioners in the community are willing to provide abortions. Each abortion takes a child’s life and this report should encourage the pro-life community to be even more diligent in working to build a culture of life in New Mexico.

[In addition to her work with AbortionFreeNM.com, Tara Shaver also is a contributor to OperationRescue.org and AbortionDocs.org.]