Topeka, KS — Kansas House Speaker Melvin Neufeld has made comments in the media disparaging efforts by legislators and Operation Rescue to bring abortionist George R. Tiller to justice for violating state laws banning abortions after 21 weeks gestation.
“Neufeld’s betrayal is particularly disturbing because he was once one of the staunchest supporters of the pro-life cause,” said Operation Rescue President Troy Newman. “We have to wonder what he has been promised that would make him turn like this.”
Neufeld called the effort launch a House investigation into Tiller’s alleged criminal behavior and subpoena documents, a “witch hunt.”
“I don’t think it’s the speaker’s job to authorize witch hunts, which is what they were asking for,” Neufeld said.
“Neufeld is resorting to the dishonest pejorative propaganda language of the abortion camp to wrongly demonize the effort to charge Tiller,” said Newman. “Because the Tiller matter has been handled differently than any other case in Kansas history, there is a strong suspicion of corruption. There is a legitimate concern that the state’s governor and attorney general may be compromised because they have been the beneficiaries of Tiller campaign support. A House investigation not only is in order, but it is irresponsible to allow this situation to continue without one.”
In addition, Neufeld characterized e-mails and phone calls from individuals concerned about the Tiller scandal as “intimidation.”
“To characterize as ‘intimidation’ the concerns of men and women who have taken time out of their busy lives to express a deeply held point of view is a slap in the face to those people. That attitude is unacceptably arrogant in a man who is supposed to be a public servant,” said Newman.
Neufeld also accused Operation Rescue of using the Tiller situation to get its name in the paper and for fundraising. He called Rep. Ben Hodge “childish” for resigning a committee post in protest of Neufeld’s lack of leadership.
“Neufeld has reduced his arguments to Ad Hominem attacks because he doesn’t have a legitimate argument to justify what he has done,” said Newman. “We don’t need our names in the paper. We need someone to uphold the laws and stop Tiller from killing innocent, viable babies that the law should protect. Vilifying us, Rep. Hodge, and other legislators is only deflecting attention to the fact that his actions will cost the lives of innocent children.”
Read referenced news articles:
AP, Topeka Capital-Journal, Wichita Eagle 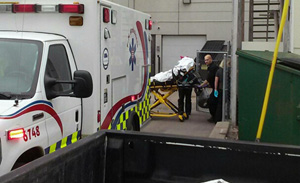