“My life has been ruined because of him”

The notorious Ghevont Wartanian, who has been sued over 20 times for malpractice and negligence, is keeping the suspended Ferrer’s Severna Park abortion mill dangerously open for business — for now Severna Park, MD — Denise Crowe was just 21-years old when she discovered she was pregnant with her second child. She was already struggling to raise her 3-year old son, and did not think she could afford another baby. It is unfortunate that Crowe did not take advantage of the large network of pregnancy help centers in her area that could have provided her with the resources and support system she needed to make room in her life for her new baby.
That would have saved her life.
Instead, on February 3, 2006, Crowe walked into Romeo Ferrer’s Gynecare Center abortion clinic in Severna Park, Maryland, for a second trimester dilation and evacuation abortion in her 16th week of pregnancy under the mistaken impression that an abortion would solve her problems. Less than two hours after her abortion began, Crowe was pronounced dead.
Crowe’s death was hidden from the public until April 7, 2010, when the Maryland Board of Physicians filed a petition against Ferrer for “failure to meet the standard of quality care” in his fatally negligent treatment of Ms. Crowe. According to records, Ferrer had given her a fatal overdose of Demerol, failed to monitor her vital signs, and took inadequate emergency steps to revive her.
(Read the Petition)
Ferrer suspended

Upon learning of Crowe’s botched abortion death earlier this year, a coalition of pro-life groups, including Operation Rescue, asked for the immediate suspension of Ferrer’s medical license. At the direction of pro-life groups, a complaint was filed with the State Attorney’s office through attorney Matt Paavla. Paavla’s complaint has been forwarded to the Criminal Investigation Division’s Homicide Unit of the Anne Arundle County Police Department. (See Letter From State Attorney to Homicide Unit)
In a somewhat surprising move four years after Crowe’s death, the MDBP suspended Ferrer’s medical license on September 8, 2010, stating that the Board had concluded that “the public health, safety or welfare imperatively requires emergency action.” (Read Ferrer’s Suspension Order)
The action came amid intense public scrutiny sparked by pro-life groups and the publicity that followed the unrelated discovery that a secret illegal late-term abortion clinic had been operating in Elkton, Maryland, by unlicensed abortionist Stephen Chase Brigham, who was aided and abetted by at least two other abortionists.
With Ferrer’s license to practice medicine suspended, it might be assumed that his abortion mill, where records show he committed abortion abuses for over 30 years, would be close and the public would be protected. (Read Ferrer’s 1992 disciplinary documents)
That assumption would be wrong.
Suspension fails to close dangerous abortion business
Ferrer’s Gynecare Center never missed a day of business and continues to operate with help of the notorious abortionist Ghevont W. Wartanian. As dangerous as Ferrer was, it may be that he has replaced himself with an abortionist that poses an even greater threat to the public, based on Wartanian’s sordid history.
Maryland residents may remember Wartanian from a rather lengthy Page One exposé published in the Baltimore Sun on August, 2, 2001, which uncovered a shocking lack of oversight at that time by the Maryland Board of Physicians and launched a call from state legislators for reform.
Long time danger to the public
The article revealed that Wartanian’s case was an example of everything that was wrong with the Board. He had incurred 18 malpractice suits over twenty years of practice, forcing settlement payouts in excess of $2 million. Maryland law required that any physician with three or more malpractice suits be referred to the Maryland Board of Physicians for discipline, but Wartanian had gotten off scot-free.
The Sun hilighted three disturbing malpractice cases that Wartanian settled out of court.
Zachary Smith’s avoidable death
There was the case of Patricia A. Smith, who lost the life of her son, Zachary to Wartanian’s negligence. She was offended by his “cavalier attitude” toward her the next day when he “shrugged off” the incident by telling her that these things happen and she could always have another child.
“It was just a horrible, horrible experience,” said Smith. After suing Wartanian, Smith eventually received $150,000 from his insurer in an out-of-court settlement.
Paul Hayes’ avoidable death
Kristie Thornton Hayes sued Wartanian for the needless death of her baby, Paul, in 1992. Hayes, only 18 at the time of the incident, was unaware that she had contracted the genital herpes. Wartanian dismissed a hospital resident’s concerns that lesions he observed on Hayes were likely an outbreak of genital herpes. He rejected recommendations that a C-section delivery was required to insure that the baby did not contract the potentially lethal virus. Wartanian ignored the warnings and delivered Baby Paul vaginally. He died 18 days later from complications after contracting the virus. Hayes sued Wartanian, who settled out of court with her for $200,000. Wartanian insisted that he was not at fault because he trusted his patient when she said she did not have a sexually transmitted disease, shifting the blame for his fatal decision. He was also said to have the same unconcern for Hayes loss that he showed after the death of Zachary Smith, by telling her “things happen.”
“Is it my fault to trust her?” Wartanian told the Baltimore Sun. “I trust my patients. I cannot investigate and dig around. I take it as it is, that it’s true.”
Patricia Davis: “My life has been ruined because of him”
Patricia L. Davis who nearly died during “a routine surgical procedure.” Wartanian punctured Davis’ bowel during a laparoscopy. Wartanian either failed to detect the injury, or simply did nothing to repair it. Davis said that Wartanian ignored repeated calls from her complaining of excruciating abdominal pain.
After three days, Davis was taken by ambulance to Franklin Square Hospital Center, where staff examined her and called Wartanian. According to the Sun, Dr. Wartanian told the staff to tell Davis to take Tylenol every four hours and release her. In depositions, Davis testified, “I remember that I couldn’t believe they were letting me go.”
Three days later, a friend stopped by to find Davis vomiting and “in bad shape.” This time, Davis was rushed by ambulance to Johns Hopkins Bayview Medical Center, where surgeons found that two liters of stool had been pumped into Davis’ abdominal cavity through the hole Wartanian had punched in her bowel nearly a week before. She required an emergency colostomy and several other major surgeries over the next several months.
A jury awarded Davis $1.5 million, an amount that was later reduced. Wartanian’s insurance eventually paid Davis $926,000, but that did not make up for all of her pain and suffering.
“I still get emotional over this, just the thought of everything I went through,” Davis told the Sun nine years ago. “My life has been ruined because of him, and he’s still living his life as though he’s never done anything wrong.”
Attorney sought Wartanian review
Kristie Hayes’ attorney, Daniel M. Clements, wrote a letter to the Maryland Medical Board in 1994 asking for an investigation of Wartanian’s competence. The Board looked at the Hayes case and decided to do nothing. In 2000, Clements read about the Davis case and the $1.5 million judgment against Wartanian. He again wrote to the Board asking for a thorough investigation.
Clements was incensed that the Board “chose to do absolutely nothing” about the 1994 complaint against Wartanian. “I recognize that doctors make mistakes,” Clements wrote. “However, a physician who has had [so many] malpractice cases against them is in need of a meticulous examination of their practice.”
Then came the Baltimore Sun exposé. It looked like there would be real reforms and that Wartanian would finally be disciplined for all the “mistakes” that had led to so much suffering and grief.
Two years later, in 2002, while the General Assembly was considering amendments to the laws to reform the manner in which the Board disciplined doctors, the Board’s chairman, Dr. Samir R. Neimat, notified Clements that no Board action was found to be warranted against Wartanian. Again, he slipped out of being held accountable for his actions.
To this day, even though additional malpractice suits have been filed against Wartanian, he still boasts of a clean record which belies the truth behind a career that has been characterized by what can only be described as quackery.
Operation Rescue contacted Clement’s client, Kristie Thornton Hayes, with a interview request for her reaction to the fact that Wartanian had resurfaced. She responded, “I’ve done everything I could to keep him from practicing. I’m just to tired and do not wish to talk about it. It’s just too hard. Thank you for asking but I have to decline.”
NAF’s fatal (sub)standards
For now, Wartanian continues to do abortions at Ferrer’s Gynecare abortion mill. According to the business’ web site, “The Gynecare Center is a member of the National Abortion Federation (NAF). All standards of care meet or exceed NAF guidelines.”
Apparently those standards to not include competent licensed physicians that have not killed people with their substandard and negligent practices.
Gynecare Center advertises on the internet as a “reputable abortion clinic in Maryland,” a claim that could qualify as false advertising.

“Women are led to believe that Gynecare is a safe clinic and that the current abortionist has a clean record. They are lured into this abortion chop shop without a full understanding of the history behind the abortionists or the horrific history of abuses that exists there,” said Operation Rescue President Troy Newman.
“It is despicable to mistreat women with this kind of deception in order to financially profit from them at a vulnerable time in their lives, and it is even more despicable that the NAF provides cover for these quacks.”
No abortions after September 30
Wartanian may not stay at Gynecare long, given the increased public scrutiny of Ferrer concerning the Denise Crowe abortion death case. Wartanian has been publicity-shy since the Baltimore Sun’s 2001 incriminating exposé. Calls to Wartanian’s own practice in Glen Burnie, Maryland, confirmed that he does not do abortions at his private clinic.
Operation Rescue’s undercover investigations confirmed that Gynecare is not scheduling abortions after September 30, because Wartanian has not committed to continue abortions beyond that date.
“Wartanian was willing to do abortions in secret, as long as no one knew he was helping Ferrer keep his mill open, but now that publicity is ramping up, Wartanian may not want to get sucked into Ferrer’s vortex of legal problems. He apparently has enough of his own,” said Newman.
But it might be too late for Wartanian to quietly extricate himself from Ferrer’s shoddy abortion business. Operation Rescue is asking the Maryland Board of Physicians for another review of Wartanian’s competence and for the permanent closure of Ferrer’s Gynecare Center abortion mill in a letter sent on September 20.
“We pray that Gynecare will permanently close at the end of the month and never reopen,” said Newman. “The abortion mill has proven to be a danger to the public whether under Ferrer or Wartanian. If the Maryland Board of Physicians thinks Ferrer should be suspended, there is no logical reason that Wartanian should be allowed to continue practicing, either.”
Read the full Baltimore Sun article, dated August 2, 2001 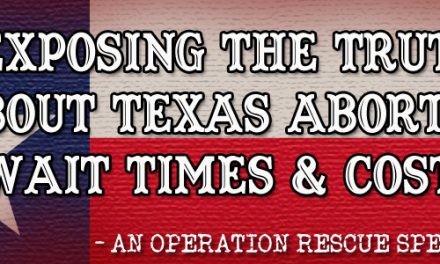 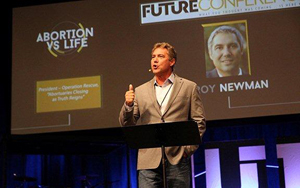