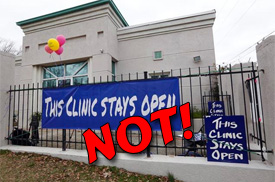 Jackson, MS – The last remaining abortion clinic in Mississippi, the Jackson Women’s Health Organization, has received notice from the Health Department that it intends to revoke the clinic’s operating license after an inspection found that it is has not complied with a state law that requires that all abortionists maintain local hospital privileges.
Closure of the clinic may take up to six weeks until a hearing can be held and a formal revocation can take place. JWHO will be allowed to continue operating until the hearing can be held.
“We are confident that these are the final days for the last abortion clinic in Mississippi. We look forward to the moment when it can no longer unjustly take innocent lives or place the lives and health of woman at risk,” said Troy Newman, president of Operation Rescue and Pro-Life Nation. “If that abortion clinic’s abortionists are so bad that no hospital will have them, then the clinic is just too dangerous to operate.”
Newman continued, “Women deserve better than to be left to fend for themselves in the event of abortion complications while the abortionist flies off to another state leaving others to clean up his mess. Without an abortion clinic preying on women while they are vulnerable, women will have the opportunity to seek legitimate medical services and other community resources readily available to them that will not leave them suffering in an ER without proper continuity of care.”
Clinic owner Diane Derzis is certainly no stranger to legal problems. Last year she was ordered to shut down her New Woman All Women abortion clinic in Birmingham, Alabama, after inspectors found 76 pages of violations following the hospitalization of three patients in one day for abortion complications.
As she was in the process of losing her dangerous Birmingham clinic, Derzis filed suit to block the new Mississippi law. She received an injunction that extended the deadline for compliance while she sought hospital privileges for her three out-of-state abortionists. That deadline passed on January 11, 2012, without JWHO’s abortionists obtaining hospital privileges.
On January 16, state inspectors visited JWCO and found them in non-compliance. The Derzis received a letter Friday, January 25, from the Health Department notifying her that the State planned to revoke its operating license.
The Jackson area has seven hospitals where JWHO’s three out-of-state abortionists could seek privileges. Those abortionists are Willie Parker of Washington, D.C., Bruce Elliot Norman of South Carolina, and Gary Burks Broadnax of Georgia. The trio did not apply at two facilities because those hospitals are operated by religious groups that were unlikely to grand privileges to abortionists. The other five hospitals rejected their applications.
A fourth abortionist employed by the abortion clinic had hospital privileges, but those expired July 27, 2012, and have not been renewed.
A Health Department hearing is expected within a month. Meanwhile, Derzis continues to challenge the Constitutionality of the law, a desperate effort that is not expected to succeed.
“Essentially, when we boil things down beyond the rhetoric, Derzis is fighting to keep abortion dangerous. That is an appalling betrayal of women, who will be better off without this predatory clinic in their midst,” said Newman.

Read about the checkered history of abortion in Mississippi