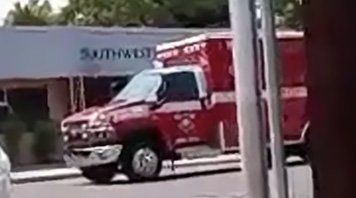 Albuquerque, NM – Abortion Free New Mexico has reported that a rescue squad and ambulance were spotted providentially by a passerby yesterday at the Southwestern Women’s Options, a all-term abortion facility in Albuquerque, New Mexico. SWO is one of just seven abortion facilities to openly conduct abortions throughout all nine months of pregnancy.

Katrina Griego, who took video of the medical emergency, happened to pass the notorious abortion facility at the time of the emergency while taking her friend to a doctor’s appointment at the nearby UNM Medical Center.  She alertly used her cell phone to record a few moments of video that clearly showed two emergency vehicles in the late-term abortion facility’s parking lot.

Additional details about the incident are unknown at this time.

This is the thirty-sixth known medical emergency requiring ambulance transport to be documented at Southwestern Women’s Options over the past dozen years.

“We have to wonder how many more life-threatening emergencies have happened at this abortion facility when there was no one there to witness it,” said Troy Newman, President of Operation Rescue, which tracks and reports on abortion-related medical emergencies that take place at abortion facilities across America.  “We appreciate Ms. Griego’s quick thinking in recording the incident and the diligence of Abortion Free New Mexico to report these events that happen in their community.”

“The pro-life community knows all too well that abortion always ends with a dead child and leaves many women maimed and some injured for life,” said Tara Shaver of Abortion Free New Mexico. “Every abortion is a human tragedy and in New Mexico we have late term abortions through all nine months of pregnancy, which makes our state the late term abortion capital of the nation. Since abortion facilities have no oversight in New Mexico and are never inspected by the department of health, all we can say with certainty is that women continue to be subjected to dangerous abortion practices that have killed at least one woman.”

Southwestern Women’s Options is owned by the aging Texas abortionist Curtis Boyd, who admits to having conducted illegal abortions prior to the 1973 Roe v. Wade decision that decriminalized abortion in America.

Serious abortion injuries that have been recorded at the Albuquerque abortion facility include a May 2011 incident involving a woman who suffered a ruptured uterus during the delivery of her intact, but very dead 35-week-old baby during an Induction abortion procedure done by abortionist Shelley Sella.  An expert that testified at her disciplinary hearing estimated the baby weighed as much as 7.5 pounds and testified that it was “a thousand wonders” the woman did not die.  Despite Sella’s errors in conducting the dangerous abortion, the New Mexico Medical Board declined to discipline her.

In February 2017, Abortion Free New Mexico was tipped to tipped to the death of Keisha Atkins, who died from complications to a late-term abortion done at SWO at approximately six months of pregnancy.  An Operation Rescue analysis of her autopsy report revealed an effort to cover up the fact that abortion complications were in fact responsible for Atkins’ agonizing death from a raging infection developed over the four-day procedure that resulted in a condition that caused internal hemorrhaging and systemic organ failure.

Southwestern Women’s Option was also involved in a 2015 scandal involving the trafficking of aborted baby body parts. After an investigation by the U.S. House Select Investigative Panel on Infant Lives, criminal referrals were made to the Department of Justice and New Mexico Attorney General’s office with evidence that Southwestern Women’s Options illegally supplied the aborted baby remains to the university in exchange for “valuable consideration.”  Some brains harvested from aborted babies at SWO were dissected by high school students at a summer workshop sponsored by UNM.

“As long as the oversight authorities and law enforcement agencies continue to ignore from abortion abuses at this Albuquerque abortion facility, women will continue to suffer and babies – many of which are viable at the time of their abortions – will continue to die needless and brutal deaths,” said Newman.  “The responsibility for the massive human tragedy created by Southwestern Women’s Options is shared by the complicit authorities who enable the carnage to continue.” 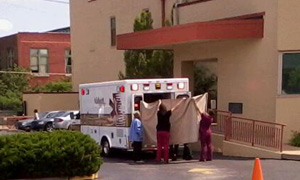