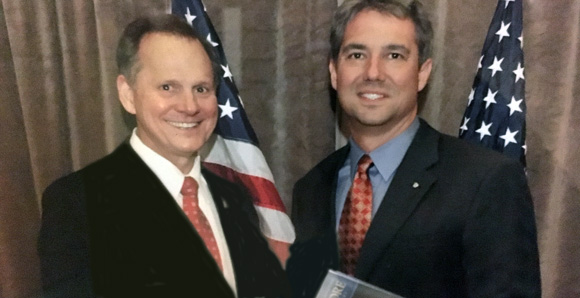 PRESS RELEASE
Montgomery, AL – It’s no secret that Senate Majority Leader Mitch McConnell did not like Judge Roy Moore, who ran to fill the seat vacated by Jeff Sessions. McConnell endorsed his primary opponent, Luther Strange, and poured an estimated $30 million into a campaign against Moore.
When Strange was soundly rejected by the people of Alabama, and Moore became the GOP nominee, McConnell continued to oppose him.
At the first sign of an unproven 40-year old allegation of sexual misconduct against Moore in the waning weeks of the campaign, the GOP halted financial support for Moore’s campaign, and several Republicans withdrew their endorsements, when they should have maintained their support in the face of such obviously fake allegations. Instead, they allowed Moore to be tarred and feathered by the spurious attacks.
However, Mitch McConnell went a step further. He promised to never allow Moore to occupy his Senate seat, if he were to be elected, even though none of the allegations had ever been proved true in the four decades since they supposedly happened.
This sent a strong message to the electorate that Moore would never be accepted as a legitimate Senator, that the people of Alabama would be disenfranchised, and chaos would reign in the Senate.
“It is my opinion that Sen. Mitch McConnell heavily contributed to Moore’s defeat, and because that led to giving a seat away to a pro-abortion Democrat, he should resign immediately,” said Troy Newman, President of Operation Rescue. “McConnell has ensured that pro-life legislation will never pass, Planned Parenthood will never be defunded, and babies that can feel pain will continue to be aborted after the mid-point of pregnancy. He has made sure that the Trump agenda will stall out, and Congress will continue in gridlock. He has betrayed the will of the American people, who support the Trump agenda, especially when it comes to ending abortion. Sen. McConnell, please resign!”