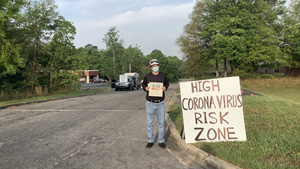 Pensacola, FL – Last Friday, Florida Governor Ron DeSantis issued an order that anyone traveling to Florida from Louisiana, where there has been a dramatic eruption COVID-19 cases, should self-quarantine for 14 days to prevent the spread of COVID -19.

However, at the American Family Planning abortion facility in Pensacola, that order is being completely ignored.

According to Dr. Tom Messe, of the estimated 80 women who received abortions at American Family Planning during the weekend of March 28, 2020, many women were from Louisiana.  It was believed that none of them had complied with the order to self-quarantine.

Some women were being brought to American Family Planning by Patio Cab, a Louisiana taxi company, without observing the quarantine and further risking the spread of COVID-19.

Dr. Messe told Operation Rescue that the sheriffs were called, but they informed pro-life activists on the scene that Gov. DeSantis’ order was “unenforceable as written.”

Marine veteran Cris Dosev, who is currently a candidate for the Florida House District 2 seat, was at the American Family Planning abortion facility on Saturday, March 28, 2020, to ensure the 14-day quarantine order for people from Louisiana was being observed.

When it became obvious that the busy abortion clinic was in violation of the quarantine order, Dosev blocked the clinic’s driveway with his truck until he could get someone from the Department of Health to assure him that the quarantine was being followed or the abortion business was shut down. Dosev then took to Facebook for a live broadcast demanding enforcement of DeSantis order. (Must see video!)

Police finally arrived and were more concerned about Dosev’s truck than they were about the spread of COVID-19 from Louisiana that were making a run into Pensacola for abortions without observing the 14-day mandatory quarantine.

Police began instructing women to park in the lots of nearby businesses and walk over to the abortion facility.

Eventually, Dosev moved his truck, but his actions drew attention to the serious health crisis created by abortion facilities that are remaining open during the COVID-19 pandemic, attracting women from virus hot spots and enabling the rapid spread of the virus to multiple states.

American Family Planning is owned by the notorious New Jersey abortionist Steven Chase Brigham through one of his many shell companies, according to documents obtained by Operation Rescue from the Florida.  It lost its abortion facility license in February 2018, and was fined $2,000 for operating under a lapsed license.

Brigham’s own Florida medical license was revoked in 1996.

“Brigham clinics are characterized by deceptive practices, impaired or incompetent abortionists, and a penchant to operate as if they are above the law. Pensacola’s American Family Planning is no different,” said Troy Newman, President of Operation Rescue.  “We urge Gov. DeSantis and the Florida Department of Health to immediately shut down all abortion facilities in Florida, in order to protect the public from the further spread of COVID-19.”

On April 1, 2020, Gov. DeSantis issued a statewide stay-at-home order. It is unclear at this time how that will affect the abortion business in that state.