Birmingham, AL – In a one-sentence decision, Alabama Judge Joseph L. Boohaker has denied a motion filed by an illegal Birmingham abortion clinic that asked him to reconsider a decision that enjoined the clinic from supplying abortions.
Life Legal Defense Foundation filed an Amici Curiae brief on behalf of Operation Rescue and CEC for Life that contributed to the ruling.
The clinic is owned by “Abortion Queen” Diane Derzis, who operates a chain of abortion clinics in the South, including Mississippi’s lone abortion clinic, the Jackson Women’s Health Organization. Her abortionist, Bruce Elliot Norman, defiantly continued operating illegally at NWAW after the Alabama Department of Public Health stripped the shoddy abortion business of its license last year. Norman claimed that he was running a “doctor’s office,” not an abortion clinic and was therefore not subject to clinic licensing requirements.
“At the original trial, abortionist Norman admitted that all he provided by way of medical ‘services’ were abortions, by his own testimony he conceded that these abortions violated the law at a location shut down for numerous health code violations,” explained Life Legal Defense Foundation Executive Director Dana Cody. “It is amazing that a motion for reconsideration was even filed. If I was in Bruce Norman’s shoes I would be embarrassed, not emboldened to continue. Norman wanted to continue aborting children at a facility where the Alabama Department of Health has already prohibited abortion by consent order due to shoddy practices. The gig is up — abortion is legal but it is NOT safe. This needs to stop and stop now. Kudos to Judge Boohaker.”
The initial closure last year stemmed from pro-life complaints filed after activists documented two medical emergencies at NWAW on the same day in January, 2012. Norman was the abortionist of record during those incidents where two women were hospitalized suffering drug overdoses administered by incompetent clinic staff.
The ADPH responded to those complaints and discovered 76 pages of health and safety deficiencies, including a third patient that required intensive care treatment at a local hospital. It ordered the abortion clinic to close.
After two subsequent failed attempts by Derzis and Norman to re-license the clinic, Norman began illegally offering abortions in defiance of the ADPH order. Operation Rescue and CEC for Life documented Norman’s illegal abortion operation submitted evidence to the ADPH which successfully obtained a permanent injunction on August 8, 2013, against Derzis and Norman. That suit was aided by another Amici Curiae brief from LLDF filed on behalf of the two pro-life groups.
“Our victory in court should be the last word on Derzis and Norman’s illegal Alabama abortion scheme, but their past behavior shows that they have no respect for the law. We will continue to vigilantly monitor this abortion clinic to ensure that the law is followed,” said Troy Newman, President of Operation Rescue. “This victory is also an example of the success the pro-life movement can enjoy through unified efforts to close abortion clinics. We appreciate the great work of CEC for Life and Life Legal Defense Foundation and look forward to working with them again to close more abortion clinics in the future.” 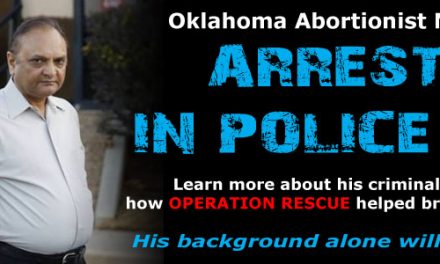 Operation Rescue: “Supreme Court Reform Does Not Come in a Brown Paper Bag”