Wichita, KS — Operation Rescue has learned that petitions calling for a Grand Jury investigation of abortionist George Tiller in the death of Christin Gilbert have been certified, opening the way for the investigation to proceed.
Commissioner of Elections Bill Gale certified yesterday that the petition contained the signatures of 6,186 qualified Sedgwick County voters, nearly three times the amount required by a Kansas law that allows citizens to convene grand juries to investigate suspected criminal violations when counties fail to act.
The certified petition is asking the Grand Jury investigate a wide range of charges against Tiller in Gilbert’s third-trimester abortion death, including second-degree murder and mistreatment of a dependent adult. Gilbert had Down syndrome.
“We are ecstatic. There is now at least some hope that justice will be done on behalf of Christin and her viable pre-born child,” said Operation Rescue President Troy Newman. “I know that the members of Christin’s family that we are in contact with are relieved that the process is proceeding.”
“We have long awaited this day, when an independent Grand Jury that cannot be bought off with Tiller’s blood money will conduct an impartial investigation into what is really going on behind closed doors at Tiller’s abortion mill. It’s high time that this man is held accountable for his actions that have caused untold misery and loss of life.”
View Certification Document
Learn more about Christin Gilbert and the Grand Jury effort 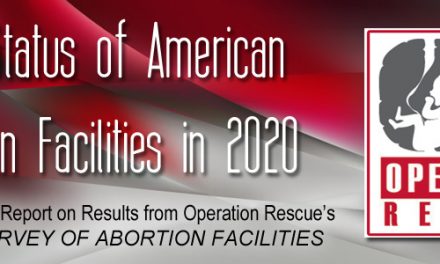 The Status of American Abortion Facilities in 2020: The First Abortion-Free State