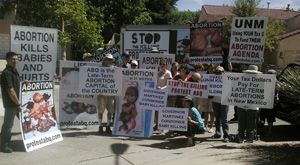 Albuquerque, NM — On Saturday, June 21, Protest ABQ held a public awareness campaign in a local neighborhood when a man, identified by group members as Jay McCleskey, Gov. Susana Martinez’s Re-Election Campaign Manager and Chief Campaign Strategist, confronted the pro-life activists stating, “You are all pieces of S***!”
“The pro-life community has been asking Gov. Martinez what she is willing to do to STOP pre-born child killing in New Mexico. We have been completely ignored until today,” stated a pregnant and astonished Tara Shaver who was present with her husband and children. Several members of our group identified Mr. McCleskey and heard his vulgarity and harsh words.
Protest ABQ continues to highlight and focus on those within our community who are supporting or condoning pre-born child killing through peaceful protests and other efforts.
Last week, pro-life groups in Albuquerque had an opportunity to expose Gov. Martinez’s inconsistent pro-life position. Despite Gov. Martinez’s campaign statements that she is pro-life, she has failed to do even one thing to address the fact that abortion remains unrestricted through all nine months of pregnancy in New Mexico.
On Monday, June 16th, Martinez held a press conference at the local restaurant, Tim’s Place. Members of Protest ABQ were present to remind those in attendance and those passing by that Governor Martinez, by her lack of action, condones abortion.
Fr. Stephen Imbarrato, director of Protest ABQ, issued the following statement about the incident, “The group Mr. McCleskey lashed out at today included pro-life families and children. Is this what Governor Susana Martinez’s campaign really thinks of pro-lifers? Could these even be her true feelings about New Mexico families and children who stand up against abortion? I think Mr. McCleskey may have possibly explained to everyone today why Governor Martinez has been so silent about pre-born child killing and has done nothing about it during her tenure as Governor! I think an explanation and an apology by the Governor is in order.”
“Gov. Martinez was elected because she told voters she held a pro-life position. Now, with another election coming up, citizens have every right to hold her accountable on the issue of life, especially since she has taken absolutely no action on that front in the past four years,” said Troy Newman, President of Operation Rescue. “Verbally abusing those who are exposing her abysmal record on life issues is completely wrong. We join with Protest ABQ in calling on Gov. Martinez to issue an apology to those individuals and families who were subjected to McCleskey’s profane tirade and, more importantly, start taking meaningful action to protect the lives of children endangered by New Mexico’s unaccountable abortion industry.”