Topeka, KS – On day two of the disciplinary hearing for abortionist Ann Kristin Neuhaus, Kansas Board of Healing Arts attorney Reese Hays continued questioning of Dr. Liza Gold, who is an expert in psychiatry that works in the Washington, D.C. Area. Hays began questioning Dr. Gold extensivly concerning 11 patient files that are the basis of the disciplinary petition against Neuhaus, who provided abortionist George Tiller with the second opinion required by Kansas law for post-viability abortions.
Nine patient files have so far been discussed. In each case, Dr. Gold expressed that Neuhaus violated the standard of care on several points in making mental health diagnoses that stood as justification for late-term abortions.
Patients discussed today included the cases of a 10-year old rape/incest victim from California and a 15-year old pregnant through a consensual relationship with her 17 year old boy friend. The 15 year old sought and received a third trimester abortion because she wanted to participate in a rodeo.
Both were diagnosed with Major Depressive Disorder, single episode, without psychotic features.
Dr. Gold noted that Neuhaus’ records contained print outs from a program called “Psych Manager Lite” that contained identical conclusions and diagnoses for the 10-year old and the 15-year old patients, which she said was nearly impossible. The program’s use is problematic since it cannot take such factors into consideration such as how pregnancy might affect such symtoms as weight gain and problems sleeping.
In all, six patients with vastly differing circumstances shared the Major Depressive Disorder diagnosis. Print outs from the computer program used by Neuhaus found in their files were virtually indistinguishable from one file to the other.
Two other cases discussed in court today involved diagnoses of Acute Stress Disorder, moderate. The cases involved a 15-year old and a 14-year old. By definition this diagnosis applies to symptoms up to 4 weeks in duration. Symptoms lasting longer than that are qualified as Post Traumatic Stress Disorder.
No traumatic stressor, which is mandatory to these diagnoses, was mentioned in either file. According to Dr. Gold, there was nothing in the file to indicate how Neuhaus came to these conclusions or even that she ever examined these patients.
Neuhaus kept shoddy records, failing to conduct and document proper mental health evaluations or sign any records to show her ownership over them.
Dr. Gold testified that each of the patients reflected in the records should have been referred to a specialist in adolescent psychaitry. She indicated it was a violation of the standard of care not to make such referrals.
Some of the patient files contained intake interviews conducted by a non-clinician member of Tiller’s staff. These reports gave personal details about the patients’ circumstanmore but were not adequate to qualify as anything other than preliminary screenings.
At least three patients expressed thoughts of suicide. The expert witness indicated that these cases represented psychiatric emergencies and could have qualified the patients for involuntary commitment to save their lives. However, there was no indication in the files that any referrals or after care for these crises were ever made by Neuhaus or Tiller.
“Some of these young ladies had very serious and complex issues, but instead of helping them get the care they needed, they gave them a dead baby and little else,” said Cheryl Sullenger, Senior Policy Advisor for Operation Rescue. “There is no disease for which abortion is the cure, and there is some evidence in the public domain that indicates that abortion increases risks for mental health problems.”
Sullenger filed the original complaint in 2006 against Neuhaus that resulted in the current Board action against her.
“Neuhaus did little more than enter yes or no answers into a dubious computer program and let it spit out a diagnosis. There was no evidence of any proper mental health evaluations or clinical information on which to base these computerized diagnoses. Neuhaus did the least possible for these women and what she did do was more akin quackery than medical care,” said Sullenger.
The final two patient files are expected to be discussed Wednesday when the hearing is scheduled to resume at 8:30 am. Rigorous cross examination is expected by Neuhaus’ attorney Robert Eye.
If found culpable, Neuhaus could see her medical license revoked since this is her third appearance for discipline before the Board. The evidence and testimony, will be evaluated by Presiding Officer Edward Gashler, who will present his conclusions before the full Board. A final decision on disciplinary action against Neuhaus could take weeks.
Background

Operation Rescue Is Not Dead Yet 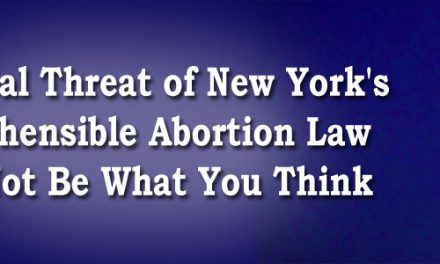