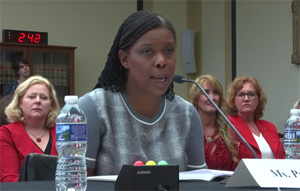 By Cheryl Sullenger
Washington, DC – The House Judiciary Committee’s Subcommittee on the Constitution and Civil Justice met Wednesday for what turned into a contentious hearing on H.B. 490, the Heartbeat Protection Act of 2017, culminating with one Democrat verbally upbraiding the only Black witness, Star Parker, for her “ignorance.”
The bill at issue would protect pre-born babies when a heartbeat can be detected at approximately six weeks gestation. The hearing was chaired by Rep. Steve King (R-IA) who sponsored the bill.
Four witnesses who appeared before the panel included Prof. Priscilla Smith, who is a clinical professor of law with the Reproductive Rights and Justice Project. She was the only witness in opposition to the Heartbeat Protection Act.
Also testifying was Prof. David Forte, a Constitutional Scholar and professor from Cleveland State University. Prof. Forte made the compelling argument that science not available at the time Roe v. Wade and the Casey Supreme Court decisions were made now makes a compelling case for the protection of pre-born babies with heartbeats.
He defined “viability” as when the heart is beating and there is a likelihood that the child will survive until term. He noted that if a heartbeat is detected at 7-9 weeks gestation, that baby has a 95-98% chance of surviving through birth.
Dr. Kathi Aultman, associate scholar from the Charlotte Lozier Institute, told the panel of her personal experience as a resident conducting abortions and her change of heart that came after the birth of her child.
“Our society has been subjected to extreme propaganda on this issue by ‘pro-choice’ advocates for years. Everything about abortion has become so distorted that the truth is no longer recognizable. . . We have also done a very good job of sanitizing our language concerning abortion. . . The abortionist ‘terminates a pregnancy’ rather than ‘killing a baby. As medical doctors and as a society, we have moved away from the idea that life is precious and closer to the utilitarian attitude of German physicians just prior to WWII,” Dr. Altman explained.
Later, under aggressive questioning, Dr. Altman addressed the matter of abortion being a woman’s “right.”
“I don’t believe our right to convenience trumps a baby’s right to life,” she stated.
The final witness to testify was Star Parker, Founder and President of Center for Urban Renewal and Education (CURE), who has previously testified before Congress. Ms. Parker eloquently commented the lack of information about the human being in the womb provided to women, and the lack of federal protections for women that would guarantee full disclosure about abortion. She discussed the toll abortion was taking in society, especially in distressed areas that include Black communities.
Ms. Parker equated abortion with the dehumanization of Blacks under slavery, and stated, “Today it is the conceived person living in the womb of its mothers that should be considered human with opportunity of equal protection under the law.” 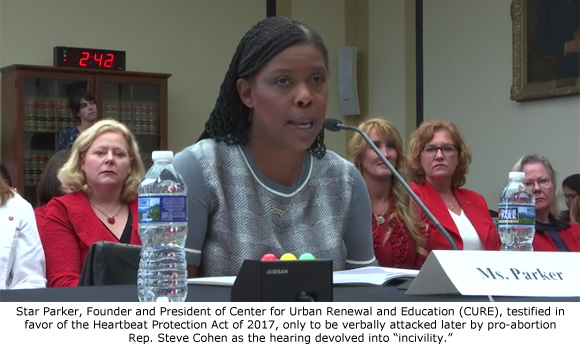 Rep. King then showed an ultrasound video of Baby Lincoln Glenn Miller, which was recorded prior to the hearing. A recording of Baby Lincoln’s strong heartbeat was also played. Rep. Steve Cohen, and Prof. Priscilla Smith, who are both pro-abortion, showed discomfort during the showing of the ultrasound images.
“It’s time to emancipate every unborn baby,” Rep. King stated.
However, questioning of witnesses soon became adversarial, first when Prof. Smith became argumentative with Rep. Trent Franks, who asked her a question about dismemberment abortion. In apparent retaliation, pro-abortion Rep. Jaime Raskin rudely and repeatedly interrupted Prof. Forte when he attempted to answer questions.
Finally, the hearing took an unfortunately turn for the worse when Democratic Rep. Steve Cohen surprised onlookers as he began to excoriate witness Star Parker, who had given articulate testimony of the devastating impact of abortion on the Black community.
Parker had addressed remarks made by Rep. Cohen earlier in the hearing concerning the need for social programs in addition to abortion. Parker said:

When it comes to mixing the abortion issue with the challenges we face in many of our hard-hit communities, I feel it is disingenuous that the issues of Medicaid come up and other opportunities to readdress what has happened and broken down in our most distressed zip codes that Planned Parenthood specifically targets these particular zip codes with abortion. Abortion is the leading cause of death in the Black Community today. Since Roe v. Wade. 20 million humans have been killed in the wombs of Black Women, and then on Halloween, Planned Parenthood tweets out that Black women are safest if they abort their child rather than bring it to term. . .
The needs of those that are most vulnerable in society cannot be addressed with abortion. Abortion feeds a narrative that women have no control over their sexual impulses and this narrative is being forced down into our hardest hit communities. We are seeing now recklessness in sexual activity and marriage has collapsed. In the fifties 70 percent of Black adults were married. Today that number is 30 percent.

Rep. Cohen angrily responded to Parker and ranted about being offended by being called “disingenuous.”
“I’d also like to say that I’m not disingenuous about anything I say about Medicaid, or Medicare. . .or SNAP programs,” Cohen lectured. “To suggest I’m disingenuous shows your ignorance or your absolute inability to deal with Congress people the way they should. I believe in those issues and I believe they are proper and to say I am disingenuous is just wrong and I expect an apology.”
Rep. Louie Gohmert stepped in to defend Ms. Parker.
“I would ask for an apology from the gentleman from Tennessee calling our witness ignorant, when it seems to me that she has a whole lot more knowledge and wisdom than. . .”
“She’s ignorant about me,” Rep. Cohen snapped before Rep Gohmert could finish.
“Everybody is,” Rep. Franks responded.
Rep. King abruptly ended the hearing due to incivility.
“For liberals, there is probably no group in our country resented more than conservative Blacks,” said Troy Newman, President of Operation Rescue, who supports the Heartbeat Protection Act. “Abortion is already a contentious issue, but when a conservative Black person voices articulate and intelligent arguments against abortion, it seems the liberals can’t help but attack them. It was disgraceful that Star Parker, who is a highly respected and accomplished woman, was treated so disrespectfully by Rep. Cohen. He does indeed owe her an apology. Cohen’s shameful outburst just goes to show what a tough fight we face if this life-saving legislation is ever to pass.”
Please contact your Representative now and ask them to support H.B. 490, the Heartbeat Protection Act of 2017.