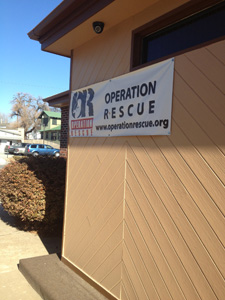 This is just a short note to update you on some disturbing developments.
Yesterday, we issued a press release indicating that we had filed a complaint and were seeking a cease and desist order on work taking place at George Tiller’s former abortion clinic, which is being refurbished for reopening by one of his former employees under the name South Wind Women’s Center. We had discovered that the remodeling was being done illegally without a permit. (You can read our release here.)
Today, we received a death threat posted to our web site on that story telling us to “back off” or face retaliation. I immediately forwarded the threat, along with the poster’s IP address, to the FBI. We also received disturbing e-mails that just stopped short of threatening our lives.
Just about an hour later, a dear friend from the pregnancy center next door to our office came over to warn me that she and some of her staff believed they heard “small caliber gunfire” coming from an area behind our office and that they were concerned for our safety. I was alone in the office at the time. I notified the FBI and made a report to the Wichita Police.
While we work across the country to stop abortion, it is our efforts in Wichita that seem to stir up the most hatred from the pro-abortion faction. Wichita is symbolic to both sides on a national level, and there are few other places where the abortion issue has so deeply impacted a community.
We wanted to go on the record and let the public know that this kind of thing is happening. It illustrates the disregard for human life and the law that those that promote abortion often have. The ones attempting to reopen an abortion clinic here can’t even obey simple building permit laws. Now their supporters are threatening us.
We are just asking for prayer for safety for our staff during this time. We have no intention of “backing off” our peaceful, legal efforts to expose wrong-doing by the abortion industry, especially in the face of threats and bullying. Those who think we will cower and draw back over this are grossly mistaken. Instead, we pray that God will touch their hearts and bring repentance and salvation to them and to all those who wish us harm and wish harm to the pre-born babies that we work to protect.
For the Innocent,
Cheryl Sullenger
Operation Rescue