San Francisco, CA — The following is a statement released by the Center for Medical Progress concerning the National Abortion Federation’s attack on the First Amendment right to free speech. Troy Newman, president of Operation Rescue, serves on the Board of the Center for Medical Progress and is a named defendant in the Federal lawsuit filed by the NAF that is attempting to block from the public videos and information gathered during an undercover journalistic investigation that relates to the sale of aborted baby body parts by Planned Parenthood.
__________
The First Amendment liberties of freedom of speech and of the citizen press are under attack in the censorial lawsuit brought against CMP by the National Abortion Federation, Planned Parenthood’s allies and proxy group. The National Abortion Federation is a criminal enterprise and a key partner in Planned Parenthood’s late-term abortion and baby body parts business. NAF seeks a Preliminary Injunction gag-order to silence CMP from publishing the evidence of criminal activity between NAF and Planned Parenthood and to censor the video evidence already released. CMP’s recently-filed opposition to NAF is available (with court-mandated redactions) here and includes:

• The factual background of CMP investigators’ interactions with the National Abortion Federation, revealing NAF invited CMP investigators to attend its meetings precisely because it was so interested in its members receiving payment for fetal tissue and organs (page 5)
• The important precedent of the recent Animal Legal Defense Fund v. Otter case in the 9th Circuit, ruling definitively that investigative journalism is not “fraud” and fully protected by the First Amendment
• 5 pages of examples of criminal and unethical admissions from NAF and Planned Parenthood abortion providers documented at NAF meetings, redacted from the public filing and prevented from release by court order (pages 10-15)

• The invalidity and unenforceability of NAF’s poorly-constructed and contradictory conference Exhibitor and Confidentiality Agreements, which NAF has admitted in court to have a primary non-disparagement purpose nowhere stated in the agreements themselves (pages 18-28)

The blatantly unconstitutional character of prior restraints on speech (pages 32-38)
From CMP’s Opposition filing:

In September 2013, the National Abortion Federation (“NAF”) became aware of a start-up company called BioMax Procurement Services, LLC, which offered to pay abortion clinics for fetal tissue. NAF representatives encouraged BioMax to attend and exhibit at NAF’s Annual Meeting in April 2014 in San Francisco. In response to a tentative e-mail inquiry from BioMax about pricing and availability of exhibit space at the next meeting, NAF responded by sending a prospectus containing what NAF now claims is its most secret information: the exact date, time, and location of its next Annual Meeting.
BioMax representatives attended the 2014 NAF Annual Meeting and told dozens of members and staff that its business plan was to pay abortion clinics for fetal tissue—and pay more than its competitors. From 2014 to 2015, it made the same proposal to abortion providers and clinic owners in several other venues. Consequently, BioMax became popular and respected in the abortion community.
[…]
CMP’s investigation uncovered extensive evidence in the abortion industry of willingness to engage in criminal practices, including the sale of fetal body parts for profit and the alteration of abortion methods to procure fetal body parts for research, as well as evidence of de-sensitization toward the highly developed human fetus by practitioners of late-term abortion.
NAF has spun this investigative journalistic endeavor into an eleven-count complaint containing allegations ranging from racketeering and fraud to trespass. Despite months of rhetoric about CMP’s putative “fraud” and “crime spree,” however, for its preliminary injunction motion, NAF relies on only two claims: breach of contract and violation of California Penal Code § 632.
Plaintiff cannot show a likelihood of success on these claims, nor can it show a threat of irreparable injury on the basis of the actions of third parties unrelated to Defendants who are strangers to this lawsuit. Moreover, NAF’s requested relief is both unsupported by the evidence and contrary to the public policy against restraining publication of matters of enormous public interest.

The National Abortion Federation and Planned Parenthood continue to trample on the First Amendment freedoms of the American people even as these two halves of the abortion industry are under state and federal investigation for their criminal sale of baby body parts. The arguments on NAF’s Preliminary Injunction gag order will be heard in the San Francisco Northern Federal District Court of California on December 18. The public filings can be found below:

“It’s a place where no woman, no person, should have to undergo a surgical procedure.” 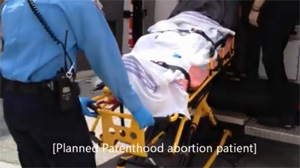