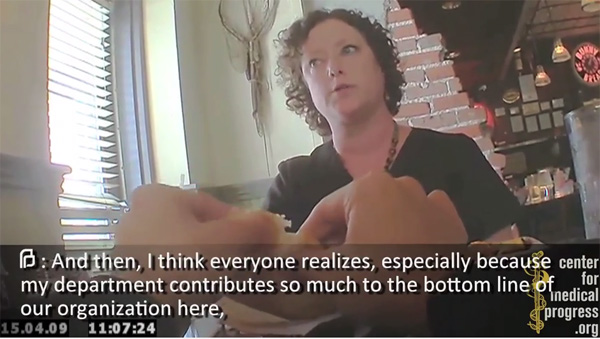 By Cheryl Sullenger
Washington, DC — This morning, the Center for Medical Progress released just over 28 minutes of video footage to correct a time stamp error in a video originally released on August 6, 2015, containing full footage of “Intact Fetuses ‘Just a Matter of Line Items’ for Planned Parenthood TX Mega-Center.” A highly cited video summary of this full footage was released on August 4, 2015.
The release of new clip related to the Planned Parenthood abortion facility in Houston, Texas, only reinforces the following claims:

• The Houston Planned Parenthood is a high volume abortion facility that provides a large number of abortions in the second trimester of pregnancy.
• This facility provides a high volume of fetal remains to biologic companies.
• Abortionists at this facility are able and willing to alter abortion procedures in order to ensure intact remains that can then be sold to biologic companies.
• Abortionists at this facility actually conduct their own experimentation on human fetal remains obtained during abortions.
• The price for the fetal remains are broken down by Planned Parenthood into “line items” and “baked” into contracts involving the sale of fetal remains.

Farrell is also heard discussing how Planned Parenthood is “risk adverse” because is subject to certain laws, then goes on to explain how the she could manipulate the books in order to conceal the financial benefit received by Planned Parenthood.
“For Planned Parenthood, the appearance of following the law is more important than actually following the law. As long as they can cook the books to make it appear they are in compliance, they can get away with whatever they want. Planned Parenthood has gotten to be quite good at this kind of deception,” said Troy Newman, President of Operation Rescue who also serves on the Board of the Center for Medical Progress.
Last week, Planned Parenthood released a “report” that they commissioned from Fusion GPS that noted the missing footage and used it to attack the integrity of the Center for Medical Progress.
The correction of the time stamp error today only illustrates that the CMP videos are correctly portrayed and that the missing video hid nothing that altered the original portrayal of the conversation with Director of Research for Planned Parenthood Gulf Coast, Melissa Farrell.
Fusion GPS, a radical leftist contractor paid by Planned Parenthood to find fault with the CMP videos, has a host of ethical and credibility issues of its own. It has been discovered that Fusion GPS is an opposition research firm of dubious credibility that is “paid by outside parties to generate negative PR against a political enemy.”
The so-called “forensic video expert” that analyzed the CMP footage was Grant Fredericks. According to court documents in one case in which Fredericks presented himself as an expert, he was found to have grossly misrepresented his experience and credentials, which called into question his credibility as a witness.

CMP Director David Daleiden also posted an article today titled “Deconstructing Planned Parenthood’s Failed ‘Forensic Analysis’ Report,” which further refutes several inaccuracies in Frederick’s “analysis.”
“The Planned Parenthood report contains multiple erroneous statements and conclusions, yet by its own words finds no ‘substantive video manipulation’ and ‘no evidence of audio manipulation.’ CMP’s investigative video recordings are high-quality and reproducible evidence that can be provided to law enforcement and official investigators in original recording format,” wrote Daleiden.
“Based on the fact that Fredericks has been caught lying about his ‘expert’ experience, the credibility of his work is what should really be in question here,” said Newman. “All of this is just a ‘smoke-and-mirrors’ attempt by Planned Parenthood to distract attention away from their own illegal activity. In response, we continue to call for the criminal prosecution of Planned Parenthood executives that illegally profited from the sale of aborted baby remains, those who put women at risk by manipulating their abortion procedures in order to obtain intact organs, and those who covered up the illegal activity.”
Holly O’Donnell, a former employee of StemExpress which contracted with Planned Parenthood for the procurement of aborted baby remains in exchange for financial compensation, was featured prominently in several CMP videos detailing her horrific experiences while harvesting organs from aborted babies at Planned Parenthood. She spoke of the veracity of the CMP videos in an interview with Dana Loesch of The Blaze.
“If you could impart one message to viewers who see, who watch these videos . . . what’s the one thing that you want them to walk away with?” asked Loesch.
O’Donnell responded, “The videos are true. And I wouldn’t be putting myself out and speaking if they weren’t true . . . I’ve never been in the news, never been a part of anything like this. I wouldn’t put my life at risk if this wasn’t true.” 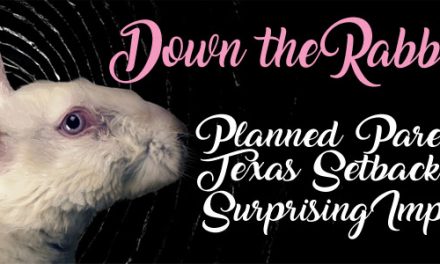