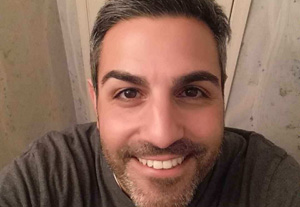 Abortionist Eric Yahav is accused of attempting to force his girlfriend to abort their baby, then beat her when she wouldn’t.

By Cheryl Sullenger
Cherry Hill, New Jersey — When is a woman most at risk of suffering domestic violence? When she is pregnant, especially if she is resisting pressure to abort a baby she wants to keep. Operation Rescue has documented one such case, but with a twist. The accused abuser is an abortionist.
A Pennsylvania abortionist, Eric Yahav, who was involved in an illegal abortion business owned by Steven Chase Brigham that was closed by the State in 2013, has been accused by his pregnant girlfriend of subjecting her to physical violence and attempting to force her to abort their baby.
The pregnant woman, who we will call “Mary” to protect her identity, contacted Operation Rescue in early December and begged for help.
“I feel like no one will help me. He has all the money, power, and status . . . This man is making a lot of money performing abortions. How can he be trusted to protect a woman who feels forced into abortion when he didn’t respect me, pregnant with his baby, enough not to hurt me,” Mary wrote in an e-mail. “I have lost everything because of him.”
She expressed that she lived in fear of Yahav’s abusive behavior. This fear was compounded when those she went to for help dismissed her concerns and took his word over hers simply because he a doctor.
Operation Rescue advised her to go to the police and to move her and her son from a previous relationship to a safe location. Mary and her young son have since moved out of the Yahav home to an undisclosed location for their safety.
Mary applied for and received a protective order against Yahav on December 11, 2015. At the time when the protective order was issued, Mary was 20 weeks pregnant.

“We have filed complaints against Yahav’s medical licenses and are demanding a full investigation into this abusive and dangerous situation,” said Operation Rescue President Troy Newman. “The allegations of violence against this woman must be taken very seriously. If true, he belongs behind bars!”
Yahav, who once worked for Steven Brigham’s American Women’s Services abortion clinic chain, now works at Cherry Hill Women’s Center, a New Jersey abortion business, and at two other abortion facilities, according to Mary.
She alleged that she met Yahav during her brief employment as a nurse with disgraced New Jersey abortionist Steven Chase Brigham and began a seven-year relationship. Mary and her young son soon moved in with Yahav. However, Mary says that when she became pregnant with his child, he became abusive and demanded that she abort their baby. 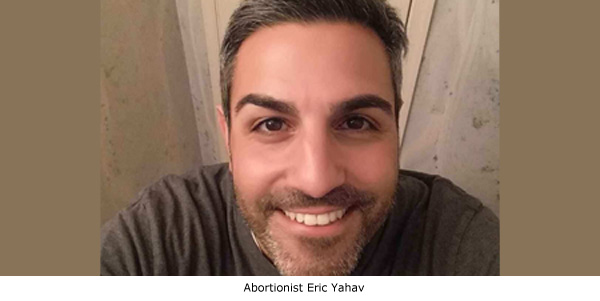 In her petition for a protective order against Yahav, Mary states:

Since becoming pregnant, Eric Yahav has become physically and mentally abusive because he does not want me to continue pregnancy. He works as an abortionist and over 6 weeks made 4 appointments for me to have an abortion. Each time when I refused to go he became violent and threatened to kick me and my son out of the house. He threatened if I did not have an abortion he would “make my life hell” and I could watch and see what he did to me.

Mary went on to describe the violence she was forced to endure on December 4, 2015, when he demanded that she accompany him to the abortion facility where he worked for an abortion she did not want.

I refused and he attacked me several times. He pushed me down the stairs and attempted to drag me out of the house. He slapped and kicked me. I dialed 911 and he grabbed my phone.

To back up her claims, Mary provided Operation Rescue with two explosive video clips that she took during episodes when Yahav was physically abusive and attempting to remove her from the house so he could take her for an abortion. Mary told Operation Rescue that the clips were short because he would grab her cell phone and turn it off during the attacks.
“I am afraid he will do whatever it takes to make sure I do not have this baby,” she said, adding that he has taken her car and left her without money or food in an attempt to force her into having an abortion. 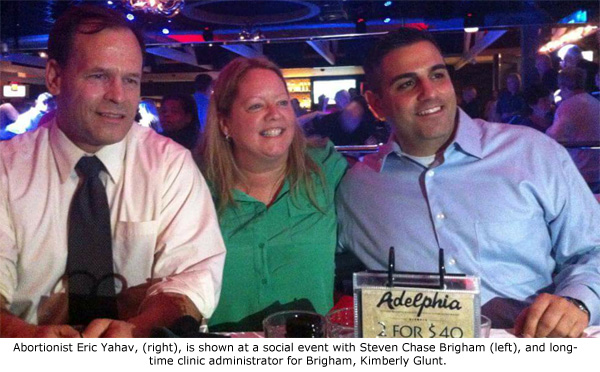 Once, Mary claims, Yahav took her after hours to one of the abortion offices where he works. He told the office manager she was having a miscarriage and he needed to perform a D&E, but she would not consent. At that time, Mary told Operation Rescue that she was sure she was 15 weeks, 5 days pregnant, and only got into the car because she knew the clinic was only legally permitted to do abortions to 14 weeks, 6 days.
Mary was sure the clinic staff would refuse to allow the abortion if she was beyond the legal limit so she asked for an ultrasound exam, but started to worry when the technician would not let her see the screen. Mary was told that she was only 13 weeks pregnant.
“I told her that was not possible. . .I asked again to see [the ultrasound] and she refused and I asked to leave. Things got bad in the car and at home,” Mary said.
Mary explained how again the abortion clinic staff she expected to protect her let her down. She said Yahav scheduled another abortion appointment for her at another location, but this time Mary called the clinic and told them they put her in an unsafe position. However, the clinic worker only laughed at her and did not take her seriously.
She also alleges that Yahav pushed her down stairs when she refused an abortion, slapped and kicked her, choked her, and threw a cereal bowl at her head.
Mary’s young son was also subjected to abuse by Yahav, according to her petition for a protective order. “He verbally abused and harassed by 8 year old son until he was in tears and hyperventilating,” she stated.
“If Mary’s account is true, and we have very little reason to doubt her story, has no business in a profession where vulnerable women are exposed to him. In my opinion, Eric Yahav belongs behind bars,” said Newman.
In fact, Operation Rescue noted in a November 8, 2013, article that there were red flags about Yahav, besides the fact he was running an illegal abortion operation for Steven Chase Brigham, who had been barred from owning an interest in abortion facilities in that state:

A patient review on Vitals.com gave insight to the kind of man Yahav might be. A “1st time pregnant” patient noted on November 15, 2010, that Yahav “made me feel uncomfortable and inappropriate.” She wrote that he “Made jokes at my expense and treated as if I didn’t get it. Kind creepy. My husband said ‘pervert.’”

Mary expressed that she is concerned that if Yahav would treat her and her son as he has, he may also be abusive to his patients.
“I am afraid if he does this to me, what is he capable of doing to another woman that feels pressured to have an abortion? How can this be legal? How can he be trusted to protect women who feel scared and bullied into showing up at his clinic and do not want to have an abortion?” Mary asked.
Operation Rescue has filed complaints against his medical licenses in Pennsylvania, New Jersey, and Delaware and submitted the documents and video supplied to us by Mary. Mary remains safe with her son at an undisclosed location awaiting the birth of her baby.
In the meantime, if anyone has additional information concerning Eric Yahav that may assist in the investigations, please contact Cheryl Sullenger at 316-683-6790, ext. 112. 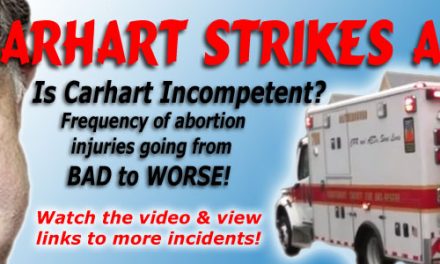