Los Angeles, CA – The California Medical Board has revoked the medical license of abortionist Nolan Jones, effective on April 20, 2009. According to the order, Jones falsified the medical records of two non-abortion patients, and violated his probation on other charges.
“This follows a national trend of abortionists being held accountable to the law,” said Operation Rescue President Troy Newman, who worked to expose Jones’ dangerous practice to the public. “Jones was one of the most incompetent and dishonest abortionists in the country – and that is saying a lot. His license should have been taken years ago.”
Jones has been disciplined at least four times by the California Medical Board for offenses ranging from botched abortions to negligence during childbirth that led to the death of a wanted baby. Community Hospital in San Bernardino terminated his hospital privileges in 1997.
Jones was a predatory abortionist who set up shop in strip malls in seedy areas of Southern California to take advantage of low income and Hispanic women. When he got in trouble or fell behind on bills, he would close up his clinics and reopen in another location under a new name, such as La Rose, The Butterfly Clinic, Women’s Center Medical Group, Clinica Medica Latina Femina, and Clinica Medica Para La Mujer De Hoy, to name a few.
In the latter clinic, Jones worked for illegal abortionist Bertha Bugarin, and later “bought” the clinics from Bugarin after her arrests in LA and San Diego for committing abortions without a medical license. Bugarin is currently serving 3 years in prison on 7 charges in Los Angeles, and is scheduled for sentencing in San Diego on 9 felony counts on Friday, April 3.
Of the six abortion mills that Jones allegedly purchased from Bugarin, all but one location has closed. That location is now being operated by two other abortionists.
Jones had also racked up a staggering amount of financial liability and unpaid bills, declaring bankruptcy in 2003 with approximately 100 creditors and nearly $100,000 in credit card debt. At one point a pro-life supporter observed an eviction notice in the back seat of Jones’ car. Jones appeared to be homeless and sleeping inside his abortion clinics.
“That man’s life was train wreck,” said Newman. “We pray for Jones’ repentance and salvation, but as far as his abortion career goes, it is good riddance.”
View Revocation Order 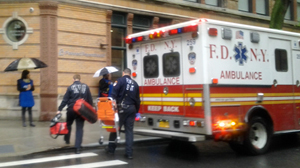