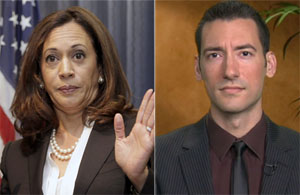 Operation Rescue calls on California Attorney General Kamala Harris to resign for abusing her power in act of political retribution. 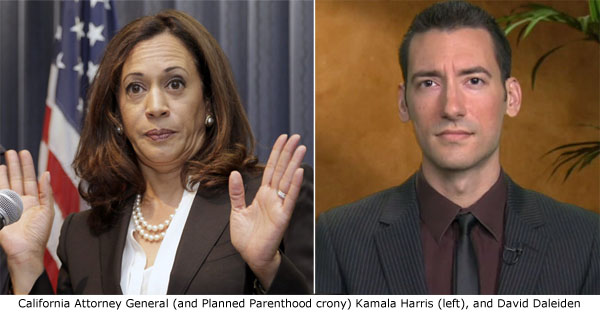 By Cheryl Sullenger
Los Angeles, CA – Since the California Department of Justice, under the leadership of Democratic State Attorney General Kamala Harris, searched the home of David Daleiden on Tuesday, there have been numerous news stories noting an apparent conflict of interest in Harris’ investigation of Daleiden and the Center for Medical Progress that ignores obvious evidence of illegal conduct on the part of Planned Parenthood.
California authorities seized a laptop and hard drives containing the video footage collected during Daleiden’s 3-year investigation of Planned Parenthood’s involvement in the illegal sale of aborted baby remains, according to a written statement made by Life Legal Defense Foundation, which is helping to defend Daleiden.
Harris, a pro-abortion Democrat, chose to focus her investigation on Daleiden and his associates rather than Planned Parenthood, even though the video footage so far released by Daleiden’s Center for Medical Progress shows clear evidence that Planned Parenthood was illegally altering abortion procedures to endure intact organs targeted for harvesting then selling the organs for profit.
Operation Rescue has obtained evidence that supports accusations that Harris’ investigation was politically retaliation, and that the raid on Daleiden’s home represents a frightening attack on free speech, freedom of the press, and our precious guarantee of equal (not biased) protection under the law.
Records obtained from the California six California Planned Parenthood organizations along with several individuals from around the nation who have identified themselves as Planned Parenthood Board Members, have contributed tens of thousands of dollars to Harris’ election campaigns over the past five years, both to Harris’ campaigns for Attorney General and her current campaign for a seat in the U.S. Senate.
Planned Parenthood organizations that have contributed funds to Kamala Harris’ political campaigns include:

In total, over $81,000 has flowed into Harris’ campaign coffers from PLanned Parenthood and other abortion promoters. She owes these people for her political livelihood.
Harris has shown that she is a puppet of radical leftists with Planned Parenthood and the rest of the Abortion Cartel paying for the right to pulling her strings.

But what could have motivated Harris to order the raid now?
Life Legal Defense Foundation pointed to an OpEd column published by the LA Times on March 25, 2016, where so-called “journalist,” Robin Abcarian, chided Harris for taking so long to take action against Daleiden.
“Over the last few days, advocates for reproductive rights have wondered aloud during interviews whether Harris’ campaign to replace Barbara Boxer in the U.S. Senate has anything to do with her apparent lack of urgency on this case,” Abcarian wrote. She concluded her missive by asking, “But what is Atty. Gen. Harris waiting for? I’d sure love to know.”
Abcarian also took to task Operation Rescue president, Troy Newman, repeating blatantly false accusations that Operation Rescue may have been somehow involved in the murder of late-term abortionist George Tiller in 2009, and that Newman believed the killing of an abortionist should be considered “justifiable homicide.”
In parroting this dishonest pro-abortion propaganda, which was fabricated to destroy a pro-life organization that has been very effective at documenting and exposing abortion abuses, Abcarian has only destroyed her own credibility as a journalist.
Obviously, there is little if any evidence of reading comprehension, contextual analysis, or critical thinking skills in her prattling.
But there is evidence that Abcarian was acting as a surrogate for an impatient Planned Parenthood, urging Harris to quickly move on Daleiden. So move Harris did.
But if large amounts of campaign financing from Planned Parenthood, the NAF, and abortion promoters isn’t enough to see that Harris is working to protect Planned Parenthood and punish those who are calling attention to their misconduct, one need only look at Harris’ own website.
Harris is promoting her petition to “protect” Planned Parenthood “and the important work it does.”
“Once again, we need you to take a stand and join Kamala in defending Planned Parenthood,” the petition states.

So, by her own admission, Kamala Harris’ goal is to “protect” Planned Parenthood, and one way she appears to be doing that is by misusing her authority as State Attorney General to silence the one who is inflicting the most damage on Planned Parenthood’s carefully crafted veneer of legitimacy and respectability.
Dispatching eleven law enforcement agents to toss Daleiden’s home and confiscate his journalistic work product was an oppressive overreach of the kind that harken to mind terms like “Gestapo” and “reign of terror.”
Operation Rescue is calling for the resignation of Kamala Harris for her conflict of interest and agenda-driven abuse of power. In what is supposed to be a country that cherishes First Amendment Freedoms, her brand of political corruption and heavy-handedness against those with which she ideologically disagrees, makes her unfit to serve as Attorney General, U.S. Senator, or even as dog catcher.

Prayer for Life Tour Evening Rallies in Cincinnati and Zanesville 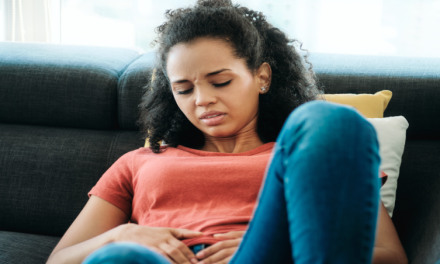