Omaha, Nebraska – Lindsey Creekmore, a registered nurse working for late-term abortionist LeRoy Carhart in both his Bellevue, Nebraska, and Germantown, Maryland abortion clinics had had charges filed against her nursing license by Attorney General Jon Bruning who is accusing her of improperly drugging patients.
Creekmore, the only registered nurse in Carhart’s employment, is accused of incompetence and negligence for administering incorrect intravenous dosages of sedatives and a labor-inducing drug to 11 patients between January 2011 and March 2012.
The complaint also alleges that Carhart’s Bellevue abortion clinic did not provide proper staffing for women in recovery. Nebraska law states that registered nurses cannot delegate complex nursing tasks to unlicensed workers, a law that Creekmore apparently routinely violated.
Her behavior violates the scope of practice in that she acted outside the boundaries of her profession and constitutes unprofessional conduct.
“Clinic records show a significant pattern of substandard care practices that, in any surgical center, would endanger the health and safety of the public,” Bruning said in a press release issued today. “We are seeking license revocation.”
Creekmore will face a formal disciplinary hearing on Aug. 5th disciplinary hearing before the Nebraska Department of Health and Human Services Public Health Division.
“This action proves that Carhart is operating a shoddy abortion business that endangers the lives of women through improper drugging and lack of proper post-operative monitoring, both violations of which can endanger the lives of patients,” said Troy Newman, President of Operation Rescue. “We will be informing the authorities in Maryland of this action and asking for similar discipline.”
For years, Operation Rescue has alleged that Carhart and his staff have engaged in shoddy, dangerous practices and have taken action to see that Carhart and Creekmore were disciplined.
“The Nebraska complaint against Creekmore validates our accusations. It is our belief that these allegations are just the tip of the iceberg,” said Newman.
Carhart is currently under investigation by the Maryland Board of Physicians based on an Operation Rescue complaint for the death of Jennifer Morbelli, who died from complications to a 33-week abortion done by Carhart in Maryland.
Read Attorney General Bruning’s Press Release
Read the Creekmore Complaint Petition 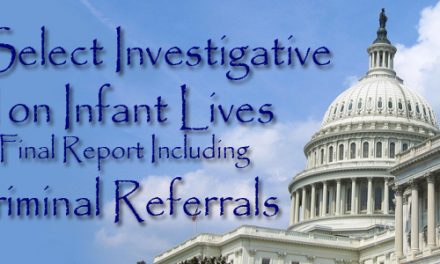