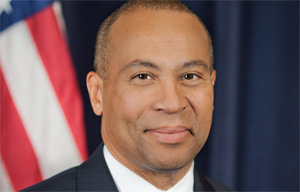 Boston, MA – Massachusetts Gov. Deval Patrick is urging the passage of a new state law that will restrict abortion protesters, calling the legislation “a pressing need” in the wake of the unanimous Supreme Court decision that struck down that state’s “buffer zone” law, which prevented pro-life speech within 35 feet of abortion facilities.
However, Patrick’s apparent panic over pro-lifers having their First Amendment rights restored likely stems from his radical pro-abortion agenda and his time as a Board Member of Planned Parenthood of Massachusetts.
“Lawmakers need to be aware that Patrick’s personal history with Planned Parenthood makes him prejudiced against pro-life speech. His twisted view of pro-life activists has tainted his perspective. He clearly has an axe to grind,” said Troy Newman, President of Operation Rescue. “The Supreme Court spoke clearly on the unconstitutionality of infringing on the First Amendment right of protesters. Now Patrick is at it again, trying to further limit pro-life speech at abortion facilities where women often want and appreciate the help offered by pro-life supporters. The women who need and want help to avoid abortions are the ones Patrick is hurting the most.”
Operation Rescue obtained documents that show Patrick sat on the Planned Parenthood Board in the early 1990’s. His name is prominently featured in Planned Parenthood’s Board Meeting minutes and on Planned Parenthood of Massachusetts letterhead.
One letter featuring Patrick as a Board Member, dated May 4, 1993, concerns a woman whose daughter may have suffered injuries at Planned Parenthood and received a refund for services rendered. [View Documents, esp. p. 3.]
Patrick, an African-American, is apparently unbothered by the racist roots of Planned Parenthood’s founder, Margaret Sanger, who proposed abortion and birth control as a way to “exterminate the Negro population.” (Woman, Morality, and Birth Control. New York: New York Publishing Company, 1922. Page 12.)
“There can be no doubt that when women change their minds outside of abortion facilities and make decisions to continue their pregnancies, Planned Parenthood loses money. It seems that Patrick is more concerned about Planned Parenthood’s bottom line than he is about truly helping women, especially women of color who are disproportionally targeted for abortion,” said Newman. “Denying pro-life supporters their constitutionally protected rights to further his abortion agenda is stepping far over the line and is an abuse of his position as governor.”
The bill, which has been fast-tracked by Gov. Patrick and passed the State Senate last week at his personal urging, would allow police to disperse pro-life protesters if they receive complaints and ban them from within 25 feet of abortion facilities for eight hours.
“The proposed law is subjective and prone to abuse. Of course abortion clinic workers will complain all day long. At some point, abortion facilities and their acolytes, such as Gov. Patrick, need to understand that abortion facilities simply do not get to abuse the rights of others and are not above the law,” said Newman.
While pro-life protesters and sidewalk counselors are mischaracterized as “violent” or “aggressive,” Eleanor McCullen, the lead petitioner in the Supreme Court case told news reporters that kind of behavior is not beneficial.
“Our mission is there for the woman first. Then, of course, we’re the voice for the unborn child. And I’m not about to aggravate and say, let’s get a little closer to the door. That’s counterproductive,” she said.
“It is clear that Gov. Patrick is trying to do an end-around the Supreme Court decision and the Constitution by wrongly vilifying pro-life sidewalk counselors in order to protect the flow of money into the abortion cartel in his state,” said Newman. “In the interest of full disclosure, his ties to Planned Parenthood abortion businesses should be known before the State House of Representatives acts in response to Patrick’s personal – and blatantly unconstitutional — biases.”