George Gardner baptized broken bodies of abortion victims in bizarre religious rituals at late-term abortion mill
Wichita, KS- Oct 22, 2004 Late-term abortion mill “chaplain” George Gardner, 69, died Thursday evening in Wichita, Kansas, after a long battle with cancer. Gardner achieved infamy as an employee of abortionist George Tiller where he would participate in sacrilegious rituals that would include the baptism of the broken remains of late- term aborted babies. “Certificates of Baptism” were offered to families of the murder victims in vain efforts to appease their consciences.

Gardner’s attempts to justify even the most heinous late-term abortions on healthy, viable babies shocked the pro-life community. He left a legacy of slain children and regretful mothers with ruined lives.
As an act of love and in an attempt to restore him to the faith, Operation Rescue had repeatedly pled with Gardner to repent from his sin and heresy over the past two years. Those efforts were rebuffed.
Operation Rescue will conduct a Remembrance Service to be held for the pre-born children that Gardner helped to kill outside Gardner’s funeral service to give these innocent children the dignity in death that Gardner denied them in life. With love and concern for their eternal souls, Operation Rescue will also be calling Gardner’s friends, family, and abortion mill co-workers to repentance at that time.
“Operation Rescue grieves with the family over the loss of their loved one, but we must recognize by his life and doctrine that Gardner is in hell today.” -Troy Newman, Operation Rescue
“We grieve with the family for their loss, yet we grieve more for the countless innocent children that Gardner helped to kill. And while Gardner’s life is being remembered, we will remember and honor the thousands of children that, because of Gardner, will never be given the dignity of a funeral.” -Cheryl Sullenger, Operation Rescue 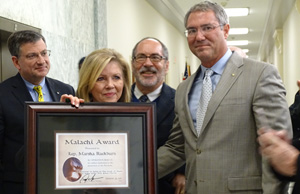